So here I am again doing another one of these things. Again I was tagged by dandylion13 at Viewer Discretion is Advised. This was actually right after being nominated for the Liebster award. So, I just have to answer a few questions and nominate 3 people to answer these same questions as well. So, instead of dragging on here are the questions.

Last Wednesday, when I went to go get my Spiderman comics at Newberry Comics, it is a popular chain in New England. However they only have literally there are four anime series and that is it. The same goes for the movie store, which mostly has used ones that are incomplete series and the Best Buy as well, but it has few and ones that are new releases, most in which are movies or Bleach. Manga is the same way the book store does not have much either, although it does have the series I get so I am fine with that. All these stores are also over 25 miles away from where I live as well, which is a pain, but it is not far from where I go to school and I have always gone to that area since I was little so the drive is not so bad.

Since my anime hobby is a secret and I live at home, online, that and Toonami is on too late for me to watch since I am usually in bed before it begins. Although I will not say the main website I use to watch new shows as they air. Old shows that finished airing I watch on Crunchyroll, Hulu (by the way they have a lot of series for free and ones that are no longer licensed by companies as well), and Funimation (who does their stuff through hulu).

Baka, it also helped me learn a word for my Spanish class since it sounds similar to the word for cow. 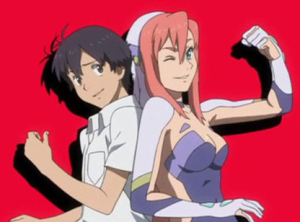 Birdy the Mighty Decode comes right to mind, at least right now, I really like that series and the overall design and flow of how the animation is, is cool. 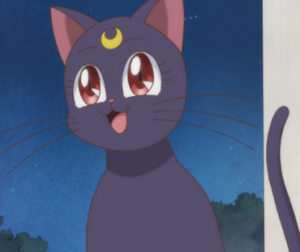 I’m a cat person and the only two that really come to mind are Happy from Fairy Tail and Luna from Sailor Moon, I am going with Luna for looking more like a cat.

Although I watched over 270 episodes of Bleach, I am not continuing it since I did not finish the series and dropped it. So I am going with Fairy Tail, which as of today has 222 episodes that has aired, (kind of ironic with tomorrow being 2/22 among other reasons).

After looking at my anime list, Tenchi Muyou! Ryo-Ohki, which is 6 episodes. This eventually turns into a 20 total series of OVAs, but this was the first batch and only one I completed even though I want to watch more.

The couple is Araragi and Senjogahara, from the Monogatari series. I really like how they interact with one another. I talked about this in my 30 Day Anime challenge already. But yeah, I like them simple as that. 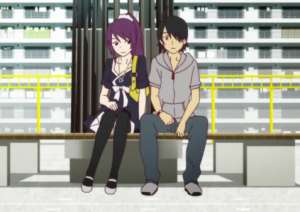 So, now it comes to nominating the 3 people for the Inspector Green Tag.