Before I begin with my random talking to introduce the review I would like to say that for all my manga reviews, although hopefully I will remember to post something like this at the start, that I am only going to review manga that I buy. Since I buy manga that I like enough to buy it, I will do my best to be as least bias then my normal reviews since entertainment factor plays more of a role for what I find entertaining. If you feel this is a problem for the manga reviews, then I would like to apologize, but you can at least get the perceptive of someone who enjoys it to the point where they bought it, although I am making sure I do point out its flaws so it does not look like I am not giving it just praise. At the same time I will make a brief say on my thoughts before the final score that if this holds up to later or prior to the point in the series, this in no way will affect the score of the review since it did not happen yet. With that said, time to get to the actual review. 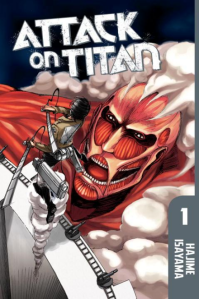 Attack on Titan, came in as a colossal and is still taking the world by storm. Is it over hyped and not lived up to the hype from its roots. Is the hype well placed, or is it very misplaced. Does it deserve it with the manga adaptation as well with how much the anime is loved by seemingly everyone that are anime fans and non-anime fans alike? What exactly did I discover reading this series a second time around?

The world is divided into a small area that is being protected by three simple walls. The walls are their guardians from the dangers beyond it. The titans that feed on people. They have no goal in life but to feed on humanity. They have no need to eat anything. They do not need to reproduce. They are humanities predators and are using them as nothing more than cattle. When the colossal titan attacked opening one of the walls, the titans swarmed the city. Eren Yaegar swears vengeance after the titans kill his mother. He vows to destroy the titans by any means.

As per usual I am only going to focus on the main characters.

Eren Yeager: The main protagonist of the series. He is short-tempered and often quick to a fight. He wants nothing more than to kill all the titans in order to avenge his mother. He enlists into the military for that very reason.

Misaka Ackerman: She is the adopted sister of Eren. She is often quiet and has little to no facial expression at all times, that is if Eren is not in any danger. She has also been noted to be one of the strongest new recruits for the military.

Armin Arlet: He is the childhood friend of both Eren and Misaka. He is often passive as well as rather intelligent. He also would like to see what is beyond the walls one day.

When it comes to this series, I really did enjoy it. The keyword is done. Reading it the first time around it is interesting, and exciting, even when knowing what happens in the anime. However it really loses to grab the attention in a second or even third reading. Although humor would be out of place for this series, if there was something other than seriousness there would be something to at least be interesting to see another time around. At the same time the ending, it would have been at least a little interesting to see what could have been done differently.

Bonus and Minus Points

+ Good Emphasis on the fights at times.

– The Art can sometimes be not the greatest.

– The Characters that will be killed off versus the ones that don’t there is a clear difference in how they are drawn, ones that do have less detail and can be seen from their first appearance that they will not be important

– The characters that are main for that matter, do not have much to them, Eren wants revenge, Misaka is silent, and Armin wines, there is not much to them as characters nor do they possess many abilities or characteristics that make them really stand out.

– Clearly visible why it becomes popular, but to me from the manga it is starting to seem average or less than average and a little predictable in the choices that are made for sheer shock value.

+ The main cast is clear and, some side characters do make an important appearance and some effort to make a difference

+ The world building is done brilliantly and is introducing things slowly over time and not all at once.

Does it hold up:

I think in all honesty a first time reading it does hold up to later in the series. Second time, it honestly makes me worry about rereading volume 2 for a review since I will more than likely say the same thing. Now, I would also like to add unlike other series, I read this one as I buy it. I only have up to Volume 8, but I know little about what happens beyond that. So up to where I have read, the world building is good, and probably one of the best things done in comparison to other series. The characters unfortunately do not change that much. I also think it would have been interesting to see if someone else took up the role of main character instead of getting what we get in the next volume.

This one is done a little differently compared to my other manga reviews. I have not had this problem before where rereading a series is rather boring. So I am giving it two scores, both in the dark fantasy and horror genre.

This series is licensed in North America by Kodansha Comics USA. If I have to tell you that an anime exists for this series you more than likely have been living under a rock for almost two years now, but a second season is in the works.