Staying similar to last time as I said before, there are a lot of unanswered questions to date for this series. Currently I am doing this one before the first one went up, so any form of change in how I do this have yet to be implemented, except one way. This theory, hopefully by the title, deals with Phantom’s Identity, two of the three speculations will bleed into the next case, which deals with Shido’s mother. The last theory is so outrageous. It is literally blowing my mind on how absurd it is just typing this part. I will also say that third theory, although can be taken as a joke in so many ways, might be one that there is more evidence for then any of the previous theory for Phantom’s identity to the point where this might be a two part theory. So, without further delay, let me talk a little bit about Phantom.

Who is Phantom and what is exactly their goal? 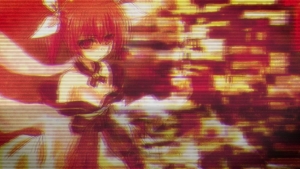 Again, at this point I assume you have seen this series, and enjoy it in such a way that you found this. Maybe I am wrong, and you just like my content, so thanks for reading this. Anyway this may contain spoilers for the entire series. I would also like to thank Devenluca for his theory dealing with the games, since one I did not know anything that happened in the games and I learned a little bit of what happened in them, and two, just talking about this made the insane theory come to mind. Anyway, again spoilers, hopefully you do not care.

-Anyway, in episode 11 of the anime it was revealed some sort of shadow figure was there the day Kotori became a Spirit. That character was referred to as Phantom, since they were clearly not shown and all that could be seen was static.

-Phantom has turned as of to date, Kotori, Miku, Origami, to Spirits.

-Phantom gave Origami power, as well as a means to set up the events from 5 years ago. (Very important for the insane one)

-It was also made known in Volume 11, that Phantom has long hair and female.

– The personality of Phantom that is known is, that they are very calm

– Phantom is will to go as far to make sure the goal is obtained.

-Abilities are known to be able to alter their voice and appearance, by using a strange noise and to disguise as whoever she wants. (Again important for the insane one)

-Has demonstrated knowledge of the future when dealing with Shido in the past. (Again important for the insane one)

Okay, with that out of the way time to get to the Theory Itself. I will say that the second theory can go alone with the first theory to some degree.

This is the most common theory, and also deals with the next theory, as well as will be a major one in the next one of these things that I do.

A lot of people I have seen as this theory that she is in fact Phantom. I have had this theory for a long time,

since when I first watched Season One almost 2 years ago (wow it has been that long). Anyway, there is a lot of proof there that she could be.

At the same time I would like to add, that I am going with one of two cases here, I am basing this fact off of the fact that Reine is in some way related to Shido, be it her mom or a close friend of his mom to the point where she treats him the way she does, it would provide a motive, for her doing this. At the same time if she is a friend of Shido’s mother, who is a Spirit by the way, (going off of that too), then let’s just say Shido’s mother is the first spirit or second spirit for speculation. If she is the second spirit that would mean DEM has her, which would prompt Riene to do all of this in order to save her, a close friend as well as presenting it in such a way that her friend’s son is safe.

So, just from the goal alone, although there is no proof that the goal exists, there is a little more evidence. Riene is a naturally calm person, she obviously knows what happens, she cares for in some way for Shido, and she has knowledge of what happens and could easily do what needs to be done to get all the Spirits to who they are in present day. She also fits the long hair and female description.

Out of the first two theories presented here this is the most likely.

Okay, so if Riene was Shido’s mom this could make sense. Since we know nothing on who Shido’s mom is well we cannot really say if she is Phantom. At the same time, going off of just the fact that she is female, and probably has long hair, it would make sense.

At the same time, making the other spirits, specifically Kotori first, it would give Shido his healing ability and a way to protect him, Phantom has that knowledge to say the least, since she knows of the future. However, a major flaw is the fact that why would she do this, well if Shido was half spirit, like I said in my last Theory thing, then maybe he could not have the power unless he came in contact with a female spirit. Although I doubt his mom is trying to hook him up with a lot of girls it also leaves the question on why not come straight out and tell Shido her identity.

So, there is not a lot of proof, mostly because we have no idea who Shido’s mother is so there is just as many holes in it as well. This is only partially likely.

Theory 3: Shido is Phantom (The insane one by the way)

Let me just stop myself and say, wait what? Seriously Shido being Phantom, how is that possible. For starters he is a boy, and he is the main character why and how could he do it.

Now, let me just stop you right there from exiting this theory. This is the most possible theory of the three. It is so crazy, so mind boggling, it almost makes absolute sense.

Let me throw in a few more details that are kind of important:

-Shido after kissing a Spirit is given their power to use.

-Shido also has all knowledge of the events that happens to the girls that make them spirits, he even forms a deep bond with them and cares for each one in some way.

-The future also has been changed once before, Date A Live volume 11 went to a whole new timeline where Origami’s parents did not die in the fire 5 years ago.

Okay, so now that information is out of the way, time to take it one step further. For starters Phantom being Shido, would not be the main character Shido, but one that is older and has sealed Kurumi’s powers. Something also had to of happen that was so devastating that would cause him to go back in time. Meaning this Shido would be from a separate timeline all together. (Granted there is a theory that Tohka is Phantom and deals with Time Travel, although her having all the abilities that are required is very unlikely).

If he had the power of the spirits, he could give them away, he already has given it to the original characters once before. He can just somehow form a crystal and give it to them. Or cause an illusion of a crystal, since Natsumi’s

powers deal with illusions and transformation.

Kotori being his sister, and her power of healing would naturally come first, since without it he would have died several times throughout the series. With his knowledge of the future, and having Natsumi’s ability to change into anything, he could even take the appearance of that of a female character, specifically Riene, someone who is always there guiding the characters into the right choices, as well as being moral support to his younger self to try to change the future.

Natusmi’s ability can change her appearance into almost anything, voice as well. She was able to change into an adult. If the Shido of the future could master that ability changing into someone from his youth would not be a problem.

If he had Kurumi’s time travel power, he could easily go and set in motion, everything. Saving Miku from committing suicide, more than likely giving her hatred towards men. In turn that would cause Shido to cross-dress, which could

later give him the idea to turn into Riene or the female known as Phantom. This would throw everyone off and look for a female character rather than a male one. He would also know of the events that made Origami do what she did the five years previously and give her the power. Making her change the future was just a way to test that it could be done, even if there was a large risk involved.

The theory does not stop there. Shido has become calmer when dealing with the events as the series progresses willingly going to save the Spirits, sure he may be nervous in the Dating Phase, and everything leading to it he is calm. At the same time, as seen in Volume 7 (final two episode of season 2), he can go to insane lengths in order to save someone he loves no matter who or what he is up against or even the odds even if it kills him.

If an event in his future was so devastating that took the lives of the people he cared for, he could use the power of the Spirits that he sealed in order to try to change the future in some way. He might know that something somewhere since the beginning might have caused something to go wrong or maybe there was something he missed at some point or another. He wants to change it before it could even come close to happening. It was already proven that events could change when it came to Origami in Volume 11.

Right there, he has a motive to do so, the knowledge to do so, and the power to do so. This insane theory out of all of them is somehow the most likely one of them all just going off of what happened to Shido and how he acts.

So, with that mind boggling, somehow most possible, insane theory, this concludes this post. If you have some theory of your own or some evidence that proves my third theory wrong (that is if the novels did not already come out and prove who Phantom is) please tell me. If there is a series you would like me to come up with a theory for please comment. If you have a Date a Live theory of your own or one that you would like me to talk about, please comment. Or follow this blog for more theories or me on Twitter.

So, with that said, bye.