Season 1 Review So, this goes all the way back to my fifth review. Back then I was really just starting out. I guess that could have been said when I did the Kamisama Kiss season 2 review. Well I guess this one is a little different compared to the other reviews I have done. For the first season well, Nick from Animecorps posted a lot about it on twitter and his blog from time to time and thanks for getting me into this series by the way. I was a little curious and watched it. So, I guess that is the little backstory. Anyway I enjoyed season one, but does the reason for me enjoying the first season translate well into the second season? The Plot: With last season Muse wanting to make it to the Love Live in order to help save their school from being shut down this season is different. With the school saved, despite them not entering the Love Live, Honoka now being the school president, everything is starting to mellow down as summer ends. It is soon learned that another Love Live is going to happen. Muse once again decides to enter, and aim to win knowing that it will be the last time that the original nine members will have a shot at winning together.   The Characters: With season one I covered the main three and two of my three favorite. I did mention that for this season I would talk about the other four members that I did not discuss last time. For the other characters it can be found on the season one review here.   Eli Ayase: She is the former President. She is one of the third years. She can sometimes be a little too serious. She is half Russian. At times she takes a leadership role when it comes to teaching the dances due to her being a very good ballet dancer. Her younger sister appears in the series and is friends with Honoka’s sister.

Rin Hoshizora: She is a first year and at times can be a bit of a tomboy or come off as a tomboy. It was revealed that in her younger years she was bullied and called a tomboy so she started to act like it. She is very close friends with Hanayo.

Hanayo Koizumi: She is another first year. She is an idol expert and is obsessed with idols. She is often very shy and is not that very outgoing. Although she always wanted to be an Idol Rin was the one that gave her the push to join Muse back in season one. 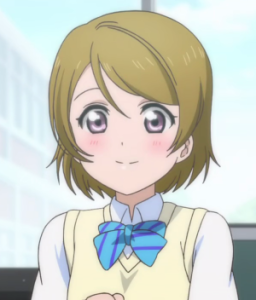 Nico Yazawa: She is another third year. She admires idols and was actually a former high school idol in her early years in school. The only problem was that the other members of the group did not want to keep up with her demands. She is the Idol Research Club President, which is the main place for meeting for Muse when they talk about what they should do. 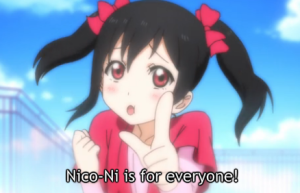 All the other characters: 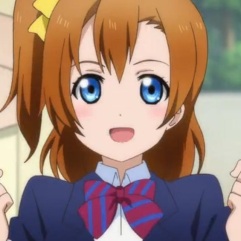 To me it felt like this season lacked something. I did say back with the first season review that this would probably be either the following or just one or two reviews after the next. Well, I did around five more than I thought I would. I will get to why later since it deals with why it lacked something. The music plays a major role in this series and it did a good job much like the first with it. The characters have changed somewhat, and some I was actually able to enjoy that I previously did not like or care for.  There was just the one problem, that thing that was lacking. It was that driving force for them to do the Love Live once more. Season One pulled it off since there was that sense of urgency hidden beneath all the lighthearted part of the series. This season at least of about ninety percent that was not there, this made me struggle.   Bonus and Minus Points: + Introduced Arise and their music something new, although just one song they sang, the characters were present through most of the series. + Nico and some of the other previously unlikable characters became more likable with the episodes focused on them which gave them more backstory. ? Nico X Maki and plenty others that clearly are trying to be set up to be together at least subtly.

? The Kiss (band) reference in episode 6, that was well-played. – As it progresses it feels like it slowly loses the charm that season one had, this is at the midway point when this point was written. – Episode 11, Our Decision, should have been sooner to really given a more important reason to taking part in the Love Live, and would have one upped the previous seasons reason for taking part in it, it felt a little too late when it came into play which caused the previously mentioned minus point. + Several Characters were given more of a back story and some more character development, then they previously had in season one which made them stand out more and become more enjoyable. This was a major redeeming factor for this season.   Does it Hold up: This is a little tricky. I will not say it fully holds up. At the same time it is not a total let down to the first season. As I mentioned the main problem with this season was that lack of importance. If it was taken slightly more seriously at the beginning with the third years leaving, then maybe it would not have been that much of a problem. This season really shined in giving more to the characters that did not really get any backstory and that played a more background character in the previous. If there were to somehow be another season, I think at that point the company just wants to make money. Although I will say I have hopes for the film, since it is shorter so it will not feel as if they are trying to stretch it out. I do wish they did change something around, which was ironic with the episode where they wanted to change. It felt like if there was a slight change compared to last season, which was actually good, this season would have been better.   Overall Score: 75/100 The lack of a pushing force brought it down. It would have been lower if not for the amount of character development to the other characters that had less backstory.   So, Love Live is licensed by NIS America.   So, what where your thoughts about this season if you saw this?

If you like what you read feel free to follow, it can also be done by e-mail. I am also taken suggestions for future reviews which can be made on List of Reviews or the Home page.   – Joe