Now, here is where I congratulate myself for finishing my first weekly review series. I made it, sure it was a little bumpy in the middle where I did two episode reviews instead of one, but I still did it and managed to do it all the way through. I aim to change it up next time for the next weekly review series. Anyway I will talk a bit more at the end. So, I will also give my score for the series as a whole. Without more distractions, time to get started for the final time in this RomCom Body Switching series.

As always with weekly reviews it will contain spoilers. However since this is the final episode I am doing a bit of what I normally do for a full series review. If you would like to know the thoughts I suggest skipping the plot section.

The episode begins with a brief telling of minor key points in the last few episodes, basically bring up the fact that everyone forgot their memories, the witches gathering and stuff like that.

It starts with Yamada trying to get Miyamura to take him to Asuka’s house. Since at the time Shirashi is in Asuka’s body. The only way to get to her house and be allowed to go in is with a representative of the Student Council. Miyamura refuses, but his sister Liona yells at Yamada to come in. The two talk for a bit about what they should do. 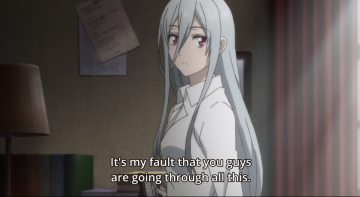 Yamada then goes back to try to convince the seventh witch to join their side. She refuses since she says the only person that remembers her is the President. Because of this she does not want to help. Yamada then tells her since they can now no longer forget her, helping the President will only make them forget about her leaving her alone again. She decides to help them on the condition she wipes Liona’s memories.

After another talk with Liona she agrees to get her memories wiped. It also reveals more about the previous Supernatural Studies Club, and how the President was a member and the only one other than Liona. She does not want to deal with the memories any more so she gets them erased.

Since it takes time for the effects to go into place, she passes the President says a few words before walking away. He begins to cry for an unknown reason before the scene ends.

Yamada is then seen finally going to get Shirashi from Asuka’s house. Shirashi says she was worried and not sure what to do since she did not know how to get back to her own body. She completely forgot about her powers. Yamada tells her everything is fine and he will fix things.

The seven witches were gathered in that church like place. It was then known that Asuka could and did get her powers back since Shinichi did not know he could give them back. Before anything can happen the President walks in and only says he will watch what happens. He realized that the feelings did not disappear and only the memories did. He did not know why he was the president, which was for the Supernatural Club to begin with. Because of this he says Yamada can do the wish.

The events of the Wish take place, I will spare some detail, since it is a scene easier scene then explained. But the wish goes through and Yamada is back outside the Supernatural Studies Club a little while later.

With everyone gotten their memories back, Yamada tells all the witches, and everyone that knew about them that he did not wish for everyone’s memories to return, but for the witches to lose their power.

While the party happens Yamada talks to Shirashi on the roof. Shirashi is disappointed in herself since she was not the first to kiss Yamada, she even flat out rejected his fake confession. Yamada tells her it was not fake, but it does not matter since she loves someone else. She reveals the obvious that it was Yamada, obvious oblivious main male lead in a romcom. The two realize they have feelings. Shirashi wants to kiss to prove her powers are gone, they do. Yamada says after words she just wanted to kiss. Shirashi says yes, and the show ends. 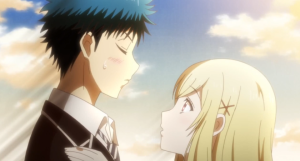 I know the manga continues after this with more witches, but with the set up in this episode it is good where it is. I will say that. This episode was more of the big reveal answering all the questions that were piling up to this point and answering them nicely. All the witches made an appearance, although I wish each had more screen time. Overall it definitely felt like a final episode and pulled it off nicely. Although it is know that there is more in the manga, the anime set it up so there is no worry for their needing to be more with this series being able to be self-contained, which is always a good thing to do unlike some series.

Series as a whole Portion of the Review

I did say where I knew it would end as well as my worry for it being rushed. As much as I would like to say that I hated how it rushed, I do not mind it. To me viewing the fact they shoved a little over 70 chapters I believe, since I stopped reading the manga around chapter 40.  I did not mind the fact that they went through introducing the witches on an episode to episode basis. I do wish that they took more time, but doing so would have dragged this series on much more than it should have making it boring, so there is no real way to be pleased with the fact. I think they handed it decent. Although this is a review and I do not like comparing shows, this was not Brynhildr in the Darkness case for rushing. Now it does not feel that way to me since I am not fully aware of the manga. Yet, that aside they did a good job with what they did. The series did do a few things right and well there were a few hiccups that felt like the manga needed to be read. Still about that thing that felt like a plot hole. Anyway, besides that this series told a complete story and I was a little worried, like all series, that the feeling for more is needed and this one did not give it that.

+ Each Witch is different in terms of problems, powers, and personality, which makes each unique and interesting for when they were shown.

+ Good development with characters and relationships

– some reveals when it comes to the relationships, Yamada realizing he loves Shirashi, did not have as much impact as it could have, maybe it was because it was obvious at that point

? The manga did feel like it was more comedic and the anime at times felt like it was lacking

This series, both the manga and anime, are streamed by Crunchyroll in North America. There is also another OVA coming out that I will talk about as well.

Alright time to talk about the other things. The next weekly series I will be doing will be Monster Musume or Actually I am a… Weekly reviews do tend to take me a lot of time. Most cases I end up watching, writing this, and posting it on the same day, they are also just as long, if not longer than my Full series reviews. I really do not like doing that. So hopefully they will be out sooner. At the same time the reason why I do this is to avoid spoiling the episode. Anyway, I did like how I made the post shorter last time and not go to as much in-depth for the plot like the last episode. Since both series I know the manga extremely well, I was thinking about doing a small thing after the score and compare it to the manga, I think it would be interesting and different to do. Although I am not one hundred percent sure, and I will not know until after the first weekly review, since I am doing both episode one reviews to know which I would feel more comfortable reviewing incase Monster Musume is too ecchi, I might be doing both. No promises on that though. I am not sure what day the reviews will be out, since one airs on Wednesdays and the other Sundays, so, yeah. That wraps just about everything I wanted to say.

So, my question is, did you enjoy this series? Do you like the idea of me making the plot discussion shorter and comparing the episode to the manga in the end for the next weekly reviews?