Actually I am Episodes 4 Review

Well with the fact I read the first 40 or so chapters of the series in a day it is starting to kick my butt when it comes to the anime. Some things to me seem a little off and I could have sworn happened later than they did. But like last week when they combined two different chapters they got something different. Perhaps that is why. I am hoping that by the next episode I will have reread some of the early chapters to get a refresher. So with that said let’s get started. As usual weekly reviews do have spoilers for the plot of the episode, so you have been warned.

The episode begins with one of Kuromine’s friends getting in trouble by the teacher for reading a magazine in class. It is then when Kuromine and the class realize that the Class Rep is not around. A few seconds later Kuromine is hit by a small projectile. Class Rep, for all intended purposes I always refer to her as Class Rep since I forget her name and that is what she is mostly called. Well she is Mini Class Rep since her main body ran out of energy.

Well after a few moments of trying to get out of class then trying to get her body out of the girls bathroom, since that was Class Rep’s idea of a means to get out of tight situation of having her body in a random spot. She also blamed Kuromine for the fact she ran out of energy. I should make it known that although it was not sad, higher levels of emotion drain her battery so when she overheard and misinterpreted Kuromine’s discussion her nervousness got the better of her.

Anyway he delivers the body to the nurses office and plugs her in. Only to then have Mikan see the Mini Class Rep and think she is a sort of figurine. Comedy ensues for well the next ten minutes, I will say that to spare the facts and humor. Also the mysteries of the school are brought up, namely the Hallway Fairy and After School Vampire. 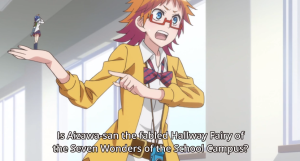 Anyway, after a brief glance at the principle, who people probably did not know was the principle till they read that part, Class Rep, in her mini size grows to normal size, more things happen before she returns to normal and a while later she is curious why she felt a certain way while all of that happened. With that the episode ends. 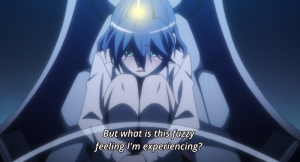 This was one of my favorite early chapters. There are a few chapters that stick out in my mind, a few jokes that do to when I give it thought, this was one of them. Although I could have sworn events happened slightly different, namely the Class Rep growing to normal size happening way later in the series. I will need to look this up, but I know the events happened early on for the remainder. Even the mysteries of the school, although 3 of them are now known, or will soon to be known, I know the other four will happen much later in the series and some joke about it being how most of that information happened just recently. Anyway this episode in terms of humor was well done. I can tell when a comedy is doing it right when my brother has to run up from down stairs to question what is so funny that I am laughing about.  This made up for last week and sort of help proves that not all episodes are funny and there are some that are exceptionally funny at times.

Overall Score: 90/100 (A comedy series I should mention by now I grade on humor and how much it makes me laugh)

This series is being streamed by Crunchyroll in North America

Compared to the Manga:

After going back and looking I know this was several different chapters where something like this happened. For starters the childhood friend of Shirgami was already introduced and took the role of the pervert, she will more than likely appear in the next episode by the way towards the end. I only know that chapter 13 was used. I know some events as I said with Class Rep growing happening later, the salute jokes also happened at some point with a similar experience. At the same time it was not until after class ended when Class Rep showed up asking for Kuromine’s help. Anyway a lot of events combined several chapters, most in which I do not know which chapters so like I said I want to go back and start to reread this series.

As always I hope you enjoy and I would like to know your thoughts on this episode.