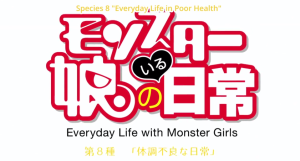 Well there are only four more episodes after this one. Wow heard to believe it. I think I will put my focus like I did with my Actually I am review episode 8 and talk about my thoughts on the adaptation as a whole compared to the manga. It feels like both episodes had some things that worked well, where I think something in this episode worked better as an anime unlike the other review were I thought it worked better in the manga. Anyway enough stalling it is till to start.

This episode was split into two halves. The first half deals with the Monster girls getting used to Rachnee. It puts more focus on Cerea’s character than the others. She brings up how you cannot judge a book by its cover, and that should say a lot seeing that they are monsters and different than people. She was telling this to Miia since Miia thought of Rachnee as evil like. 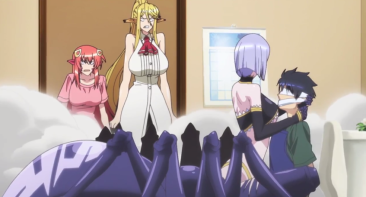 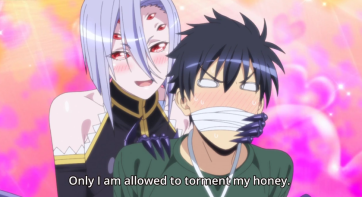 As the first half progresses and catching moments of Rachnee trying to get it on with Kimihito. Cerea intervenes and runs off with him. Things happen and ultimately Cerea reveals her true feelings of not liking Rachnee to her, which she laughs off and is glad Cerea was honest about her feelings.

In the second half Kimihito gets sick. This one gives more character development for Suu since she is the only one that can take care of him. The reason for this is so the disease does not mutate onto a subspecies and turns into a pandemic. Suu also starts talking for really come the end.

This episode main focus was character development, which I am so glad they did. In reality I forgot how much they did in these chapters for the development and having it animated it really showed. I will say they skipped a chapter where they all go to work out, but I am glad they did since these two gave more focus to the characters. As a side note they are now working on a major plot point in the series for the remaining episodes. Anyway this episode worked a lot better as an anime, I will say why in a bit.

Anyway in both halves it really gave more development to the three characters mentioned. Rachnee did not get much since she was only introduced last episode, Cerea did not get as much screen time even though she was one of the first new characters. It was good to see the series focusing all over the place on all the characters and progressed their characters making them more individual as well as not giving them a stereotype that most harem series would have and having it be similar compared to most. I am glad for the outcome on this episode and what happened.

Overall Score: A (Really enjoyable and gave a lot of much-needed character development)

Thoughts on the adaptation:

I think the scene with Suu taking care of Kimihito and mimicking the characters voices worked a lot better in the anime. For starters you could actually tell the voices were changing instead of having to think about it while reading the manga. It made it a lot more enjoyable in that sense. Some of the things worked a lot more and it is hard to say which pulls it off better the anime or the manga since it is well-rounded.  Not much to say compared to other things, but it is still true.

As always I hope you enjoyed and I would like to know your thoughts on the episode either here or on twitter.