Now before I normally begin my starting ramble I will be taking the series as a whole as part of this. This includes the second season and the OVA. The reason for this is due to this being an original series as well as it is a whole story. I will split the plot in half to mention both seasons. Also in English the name is Lagrange: The Flower of Rin-ne. Anyway over the summer I was watching a lot of shows. I a part of me still wanted to watch a mecha show, since I just finished one as well as a series that had that ever presence of feeling like it is summer. This mecha, action, comedy seems to fit.

The Plot first half:

Madoka is an energetic girl and is always willing to help people. She is part of the Jersey Club at her all-girls school that involves helping clubs and just people in the area in general in their town of Kamagawa. One day a mysterious girl named Lan asks her to pilot a robot. Madoka does not think much of it until seeing the mysterious Vox robot. She helps defend earth from the extraterrestrial threat. The two meet Muginami and the three deal with defending earth as well as trying to solve the tragic mystery of the Vox.

Set between the first and second half by Lan is now on her home world, Madoka is dealing being by herself without her friends, and Muginami is as well.

Once again the trio meet one another (almost a year has passed since the first season). Earth, specifically Kamagawa, has become the epicenter for peace talks between Lan and Muginami’s home world. To put a stop the century long conflict. With the Vox tragedy possibly looming over them and beating it once more, the three will do whatever it takes to bring about peace and still be friends by the end of it.

Madoka Kyouno: The energetic leader of the bunch. I might as well say it now but this is one of the few shows that I watched this summer where I liked all the female characters. It is really hard to pick which one is my favorite, I have stuck to Lan, but never mind for now. Anyway she pilots the Vox Midori, the green one. She has a strong sense to help people no matter what. This is mostly due to her mother and her “Onee-chan” being an inspiration to her since they were a similar way.

Laffinty Fin E Ld Si (Lan): She is the princess of La Garite. She was sent to protect Madoka. At the start and even later in the series she is not that used to earth culture. She believes Wan (woof) is a greeting for example. She did not want to pilot her Vox Orca because she was afraid of the prophecy of it. She also loves Orcas, which is where she gets the name for her Vox. Often times she can be very clumsy as well. Her mecha is the blue one. 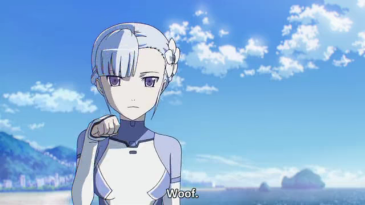 Muginami: At times when she first appeared she acted as an air-head not knowing much. This was a ruse in her part to go with her hidden agenda. Once she trusted both Lan and Madoka she acted normal. She is very kind to both of them and cares for them greatly. Her mecha is Hupo, the orange one. 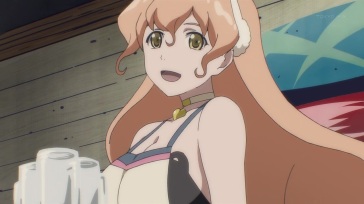 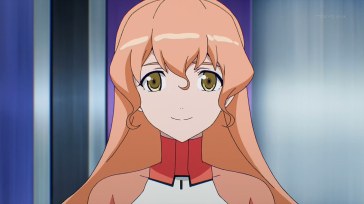 This is one series that I feel may be hard being a little bit biased to. I think this is due to enjoying it so much. But I think that just because I enjoyed it, I can still hold a fair judgement. There is always that blur between really liking a series and enjoying it. I really enjoyed it. Grated this was back in July watching it most of my late night twitter feed consisted of Lan’s “Wan pose” but at the same time enjoying a show can also say something.

There are not many macha series, and original mecha series that at the end of I felt satisfied with. Captain Earth the ending felt a little rushed, the middle felt a little repetitive. Code Geass Second season felt like it was losing what they set up for character development in the first season. Buddy Complex, although I do love how they gave the ending a two part finally. It still feels like there should have been more to it than the 14 episodes that it had. That was the one I felt most satisfied with till this one.

I do not watch many mecha series. But getting past that there are other points that make this series enjoyable. Not every episode revolved around some sort of mecha battle, but the characters, and villains too. Each character was enjoyable when interacting with one another. The trio’s chemistry worked together wonderfully. The OVA when the three were apart was pulled together wonderfully since they all were experiencing that isolation. It really resonated with the sad good-bye in the first half and brought up more on questioning what is going on in the second half with Meginami and Lan taking sides with their own planets.

The story itself, again it is hard to say since I do not watch many mecha series. But I could see some trends, such as one country trying to take over another. Powerful mechas with world destroying properties.

? Yuri undertones, including at least one kissing scene, still don’t count it as yuri though since it was forced.

– Seemingly towards the end of the second half it showed a few too many openings on why has it not ended, but at the same time it was well explained.

+ OVA was a good way to bridge the gap between both seasons, especially cool for it being a forty minute one too.

+ Tells a complete story, but still had a very and I mean a very small opening for more.

– The ancient civilizations super advanced on Earth seems a little unbelievable, but needs to be due to the fact that the aliens were once those people.

+ Story was enjoyable for the first and second half.

+ Character development is well handled all the way to the end.

This series is licensed by Vix Media in North America, it can be found for free on Hulu as well. Again known as Lagrange: The Flower of Rin-ne in English. (Not sure about the OVA on their though as well as being licensed) There is also a dub out there, did not watch it since I mostly watch subs now unless it is a second watch through.

As always I would love to hear your thoughts if you saw this series.

5 thoughts on “Rinne no Lagrange Review”