The last few months I honestly was thinking the ecchi genre has been dying for me when it comes to trying to watch it. I mean even now I am still thinking it with my struggle to watch the first ecchi series I ever did sequel, To Love Ru. Last season I failed to watch my favorite, High School DXD. Yet there is this series somehow managing and I love every second of it. So without further ado let’s get started and as always spoiler warning.

The first half starts off with Kimihito, Suu, and Papi all enjoying the cook out in the woods. Also Zombina is there too watching over them, sort of since she is mostly just eating. Before the group noticed the ground in the forest started to rumble as a giant crushed Zombina and tried to take the other’s hostage. Suu managed to escape only to fall into a giant vat of waste. Then it turns into a giant monster battle like Godzilla. The monster opens up a part to reveal Kii, a friend of Papi. 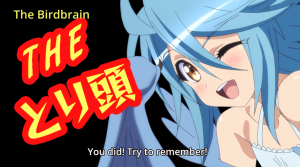 Papi explains how she planted Kii there and forgot about her. She is a Dryad and Kimihito thought she could be D since she does not like humans. Suu (now very smart from the waste she consumed) mentions the only way to calm Kii down is by getting rid of the waste in her system. (This includes nipple sucking). Anyway besides that heavily ecchi scene that I will not talk more in detail for since you can easily and probably have seen it. By the end it is known Kii is not D since she cannot write.

The second half deals with Cerea’s date with Kimihito. A devil interferes and makes well Cerea the opposite of her natural self. She basically tries to have sex with Kimihito then and there. She only snaps out when a wild bull shows out of nowhere. Rachnee was with them and captured the devil. Cerea wishes to be relied on more, and Kimihito says he will need her to be reliable.

The first half was the super ecchi stuff and it was more of a humor aspect that anything. I do like how it is being handled. There was even a character that could be spotted, the dog lady who was jogging, which made an appearance in a previous chapter that was not animated. She is actually seen one more time with Draco in the manga. Anyway enough about that. The second half I really enjoyed since it helped give more character development to Cerea. Her and Papi feel like they got the short end of the stick at the start of the series. Miia got a whole episode to be focused on while those two only got half of an episode. I think this really helped Cerea’s character. One thing that I like about this series is unlike other harems it only focuses on one girl at all times seeming who is always there. It is not the case with this one where they are all focused on equally. But anyway the second half really helped that case. Cerea has been mostly seen as the noble knight character and a nervous one when it comes to the ecchi-ness. This helped give her focus really showing that she just wants people to rely on her at times more than anything.

This series is being streamed by Cruchyroll in North America and is Licensed by Senti Filmworks.

As always I am curious for your thoughts on the episode be it here or on my twitter, which can be found on the side.