No, it is over, why it had to end already? The season went by so quickly. I just do not want this show to end. Well at least there is the manga that I get to look forward to as I cope with this show ending.

After giving myself the night to cope with the fact that this show is now over as well as getting a few possible rumors a second season is in the works, but I will discuss that at the very end on my thoughts of a potential second season and when it would or could happen.

So, besides the beginning of this review being a little longer than normal, and as always or well for the second time anyway, I will do my thoughts on the full season at the very end after I am done focusing on this episode. Focusing on this episode will contain spoilers as always. But if you skip that you can get into the spoiler free portion which focuses on the series as a whole. So, without further ado, let’s get started on the final review for this harem, ecchi, rom-com.

Well I might as well give a personal chuckle for the last time since the running jokes with harems are they have no real plot. This one is no different. But anyway, time to stop delaying the inevitable and talk about what happened.

The episode begins right where the last one ended, with Lala, who apparently her name has not been known to the Kimihito Monster Harem yet, telling Kimihito that he is on the verge of death.

Kimihito thinks this is ridiculous and the girls decide to intervene in order to get him as far as Lala as possible. Papi takes off, while Rachnee ties Lala up. Papi, of course as briefly mentioned in the previous episode cannot see well at night, and crashes shortly later. Kimihito starts to fall, but Suu luckily catches him. Cerea shows up and tells him that they should ride away, while the others help hold Lala back. Cerea is saying by running away it is honor in dishonor and while they run she gets caught up in her own fantasies. This of course only snaps her out when Kimihito is revealed to be dragging on the road.

Cerea stops on a bridge and apologizes. She was about to run away again, however Lala shows up saying they cannot outrun death. Mero pops up from the water to drag Kimihito with her. The two swim for a bit, with Kimihito nearly drowning. When the two stop, well Mero believes Kimihito will really die and wishes to have children before doing 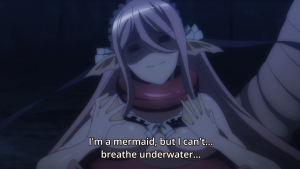 so, since she has that Tragedy Fetish in full swing at this point. She drags him below the water in order to make love to him, however he nearly drowns before Miia saves him with her tail. She goes to perform CPR, however the thought makes her tail squeeze Kimihito nearly killing him. Rachnee interferes and tell them they are over reacting. Lala is still saying the same thing, and Kimihito gets what she is saying. He says he will decide who to marry if he makes it home alive. Miia states he raised a major death flag as Kimihito goes to slowly walk in the street as a truck is driving by, however the truck is really just an RC Car.

They all show up at the house, now with Mrs. Smith scolding Lala about what she was doing. Kimihito says she is basically a Chuunibyou, so he knew what was happening the whole time. Lala wants to stay since she is curious why Kimihito does not die despite all the near death experiences he has. Mrs. Smith has no objection and the girls are not surprised at this point. 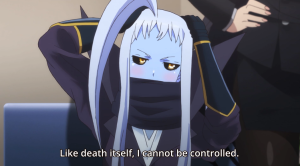 Yet that was only the first half.

The second half deals with their food shortage and them going shopping. This was not as action filled or event filled either. Ultimately after getting all the food for that day, it was all eaten up thanks to Smith’s team stopping by. Mrs. Smith also revealed because they are in the program it will pay for food expense, and she forgot to tell him. Thus the show ends more on a light-hearted note with that half. 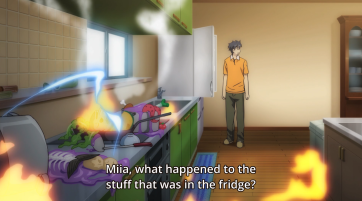 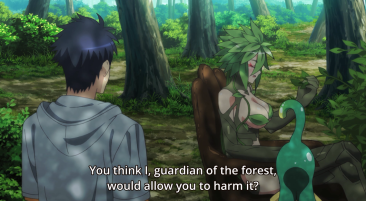 The first half was rather enjoyable. Personally with the second half I do wish they used the chapter I was thinking of, which I want to say is Chapter 30. What happens in that Chapter, Lala is basically seen to be really a grim reaper, and Kimihito escapes death. He then reveals he is not ready to marry or even chose someone. It feels like that would have been a good way to end this series, because of that fact and it still would have potential to continue, at the same time it would be fine ending there. That is all I have to say about that part.

This episode did well with introducing Lala so late in the game, even though as I mentioned before throughout the reviews, Lala makes minor appearances in the manga after this part. The build up from the end of last weeks was well done and did not waste any sort of time to jump right into the action and kept the momentum going throughout that first half.

The second half seemed a little lack luster in comparison. Again it feels like chapter 30 would have been the better choice. But with this series it has kept that consistence of going from some sort of action to light hearted-ness humor. The second half really felt like it brought down the overall episode, in all honesty it did help make me forget I was actually watching a final episode, since it did not feel that way in the slightest.

Overall Score: B (Despite wishing for a different ending, the show did stay entertaining all the way through)

Looking at the series as a whole, it feels a little difficult to judge it. In terms of plot, it does not really have any. This series is at times feels like it makes fun of the harem genre, where it avoids making relationships happen and nothing really of consequence happens. Only this series at times seems to take it to the extreme. It has always felt that way reading the manga to me, and after watching the anime it still feels that way. I think because of this, it actually makes the show well done.

Now in terms of everything else after the plot watching for pure enjoyment is more than likely where this series shines the most. Sometimes it can be ridiculous in some events be it ecchi or not. After worrying about this show, and for the other series I am reviewing as well. I am glad that this series went beyond my expectations for how it turned out. Now looking on a grand scale of what aired this season, maybe I enjoyed it since there were not many series that really got me into them, that could be the cause. At the same time, it feels like if I were to watch it alongside other shows from another season, it would still be beyond my expectations for it.

Now, comes the hard part and scoring this series. On one hand it is full of just entertaining and not watching to get some sort of drama or something you would get from some serious big budgeted series. On the other hand it feels like the one thing that does not do this series favor is the lack of plot (which has always been a trait of harems) as well as introducing new characters before the old ones get a lot of time. Yet that last part is balanced out with each character being treated equal afterwards. So, with all that in mind it is a little difficult.

– New characters come a little too often, much more apparent in the anime compared to the manga.

?? Possibly is making fun of harem series, possibly is not as well

+ Each character is treated equally and is not overshadowed by that “First/Main girl” that is in all harem series. Examples Risa from High School DXD, Tohka from Date A Live, and so on.

+ Some character development is spread over time for all characters, and they all show signs of changing over time. (Seems to not happen a lot in most anime series)

?? Ecchi at times can be mild or taking to the extreme, and sometimes is censored by scenery over fog, lights, ect.

Overall Score: 80/100 (Looking at most episodes it did not really stray from that score of B, there is room for improvement though)

Thoughts on the Season 2 Rumor:

Now, apparently in one of the scenes in the final episode on a sign, in Japanese it basically says Season two in the works, however the sign is subtle. Now could this mean this is a joke? Yes, easily and at the same time, maybe not.

Now, as of right now I have not seen any sales figures for this series. I do know that the manga at least is a lot more popular outside of Japan. In America the manga always makes it to the Best Sellers list for at least two or three weeks. So, it really depends if it sells well in Japan though.

For the manga itself the anime did skip I would like to say at least two chapters. Only one is really coming to mind, which involves everyone going to the gym. I think there was one more; I am not certain unless I go back and read it. At the same time, taking into account they are only on chapter 36, and the anime ended on 26 covering about two chapters per episode too. If you add the two chapters they skipped right now they have the ability, if done right that are and continue to only use 2 chapters per episode, to make about 6 episodes.  So, obviously the second season would not happen, till the earliest of next fall. So a second season would be doable easily now that I actually think about it. It is a monthly series so in theory it should be at chapter 48 this time next year, which is if the manga somehow ends, which I doubt it would. I could see it somehow going to 60+ chapters. So, with that in mind, season 2 could be something that could happen next year. Well, something will probably be announced in upcoming weeks.

Monster Musume has been Licensed in North America by Sentai Filmworks.

Here is a quick walk down memory lane for a bunch of pics I used for this series. (Seriously probably have well over 80 pics)

So, I would love to hear your thoughts not only on this episode, but the series as well.

Although I am not going to do a weekly series review this fall season, I do have an idea for one show I would like to review come winter. So I hope you enjoyed this weekly review for the past 12 weeks.