So some may be wondering why I am uploading this post the day the final episode aired. Simple reason being I wanted to soften the blow finding out that there is 10 episodes and watch both the same day. Only using writing and uploading this review as a nice break in between. So far it did not work, but the only reason why is because Season 2 was announced so hype replaced that depression. More on that on the final review though were I look at the series as a whole. It is sad to say that this is the next to last episode review, but without further ado, let’s get started.

Kazuma is getting used to his life in the mansion now. I mean the gang is playing chess, he can relax by the fire, and he now has no worries about freezing to death in the winter. Aqua goes to take his seat; she claims that she is the strongest now that she is level 21. Kazuma only then finds out that Aqua’s stats were at max from the start so her intelligence never went up. Pitying her he gave the seat away and went to bed. The following day Kazuma meets with two guys he sort of became friends with that do not show up again after this scene so I forgot their names, so look at the picture. Anyway, they mention there is this secret spot that is and should be known only to the male adventurers. 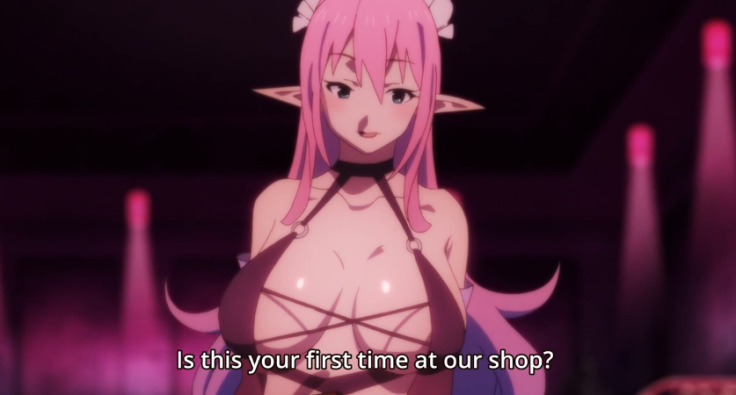 Succubus basically help them get “Nice dreams.” So for those that don’t know Succubus target men, and steal a certain thing that comes from their lower regions. Although that is not in this version, the Succubus live in harmony, sort of, they get what they want and in return give the men a nice dream. Kazuma is told that as long as he does not drink alcohol he should be fine to dream that night and someone would meet him with his requests.

So if you guessed he would be tempted by alcohol in the next scene you are correct, that and a majority of the people reading this probably saw the episode and are just more so likely to just skip to the end.

There are crabs everywhere, which is why I gave the title it did, plus it can mean two things. I mean Succubus come on.

So everyone enjoys the crabs given (really hope to find better wording when it comes time to upload) by Darkness’ family. They are so good that even Megumin would rather not do an explosion for one day just to eat them.

Aqua, being the alcoholic goddess that she is, (also isn’t she a goddess of parties?) she busts out the expensive alcohol that Darkness, hopefully obvious by now, rich family gave them. She even shows a cool trick that makes the alcohol taste better by drinking it in the crab shell. Needless to say Kazuma gets tempted.

He becomes conflicted. Having a good time, which is rare, with his companions. Celebrating in drink and merry good times. Or given into his lust and have that dream. Obviously the dream. So he says he will go to bed.

Then came the scene I could not really take pictures for. I personally find it weird though that I did not want to take any pictures. This coming from the guy who took a lot of Monster Musume ones for reviews. Here is one for example because why not.

Anyway, enough about weekly review posts. Back to the present, since Kazuma went into the bath. He falls asleep, only to “wake up” thinking he is now dreaming. Darkness, the character not the lack of light, enters the room. Of course she is in shocked getting ready for a bath, only Kazuma is all chill.

Kazuma acts like it is a dream, gets his backed scrubbed by Darkness. Darkness was super nervous at first only to have Kazuma leave at the exact second she was going into Masochist mode.

The only reason Kazuma left was due to the succubus that was to give him his dream that night got caught by Aqua.  The Succubus is a frightened little thing. Kazuma tries to protect her. The girls think he is under the succubus control. 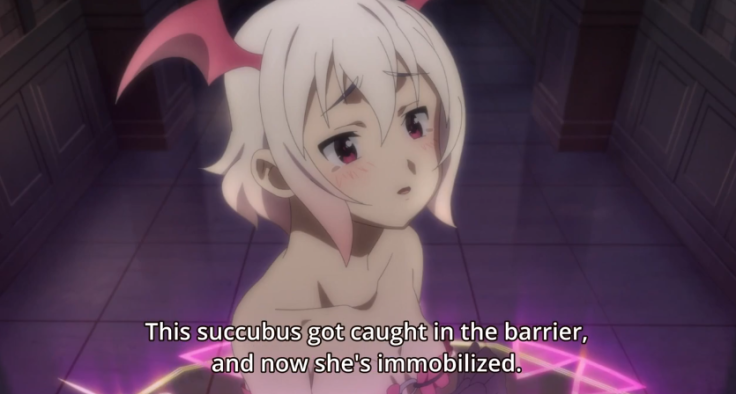 Needless to say the succubus escapes, Kazuma plays off everything with Darkness as the Succubus was in control the next day. The episode ends with, what do you know, Destroyer coming. It was mentioned several times in this episode and once or twice the last few.

It has been awhile since I watched something ecchi, Monster Musume to be precise. This episode gave it off, with equal male and female fan service. If you can call seeing Kazuma naked for a good half the episode fan service. I really should close my door in my room. At least my computer screen never faces the door.

Enough about my problems.

As a whole this episode stuck with what makes KonoSuba, KonoSuba. Even if it gave something ecchi for an episode, and even hinted at the possibility of a relationship between Darkness and Kazuma, it still held the humor high. With the final I assume to be battle filled, and equally cannot wait for. This episode was a rather interesting way to give calm before the storm.

This episode more than anything focused on Kazuma, I really liked that, mostly because his inner thoughts I always find amusing. What I liked was the fact this really added to the humor this episode. Between going to go to bed instead of being with comrades or using the backstory to avoid trouble. Sure he is questionable in terms of his honor, but it just fit well with this episode and his dysfunctional-ness with his groups dysfunctional-ness.

Next time I will do a little of the usual, however will go into a remote serious review of the series.

As always though I am curious on your thoughts of the episode.

The Reviewer’s Corner official twitter here.  (All updates, polls, and information on posts and future posts can be found there.)

If you are a blogger who focuses on anime, manga, video games or comics and make you blog known feel free to visit the blog roll page and leave a message.