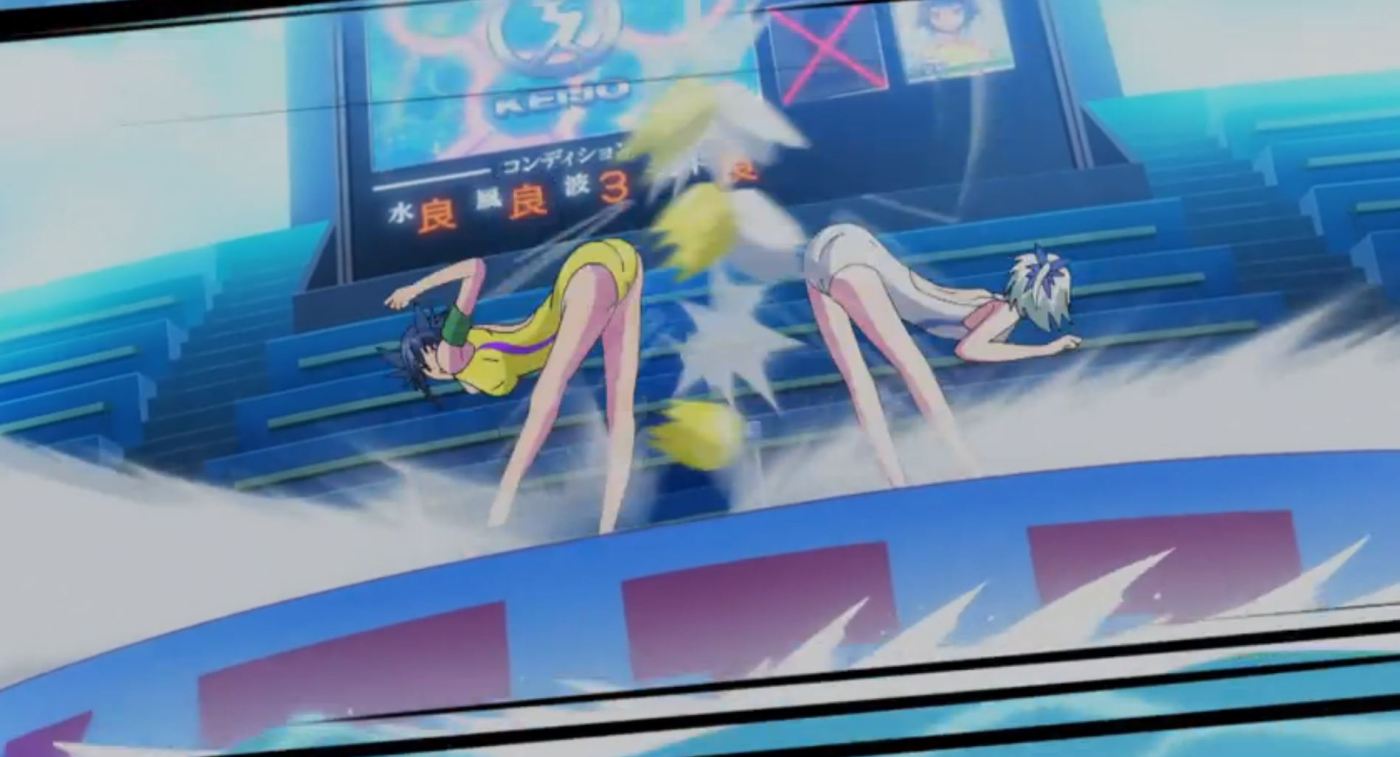 So, I checked the dub out. But I will talk about after the review. All reviews I would like to say will focus on the sub version, however if I continue with the dub, the series review may include both. Either way, a friendly reminder I do watch this more for comedy and actual plot, since in all honestly it is more sport than ecchi with this episode. Either way let’s get started.

So, last episode ended with a battle against the Elite Class. If the Elite Class member gets knocked out, they switch places with the average class. First up, Rinrin vs Miyata.

Miyata is a little cocky and sees herself that she can win. Rinrin knocks the competitors out really quick leaving it just the two of them. Thus the two fight one on one, matching one another in speed. But Rinrin activates her, what I call “Neko Mode.” Her speed increases and Miyata can barely keep up. 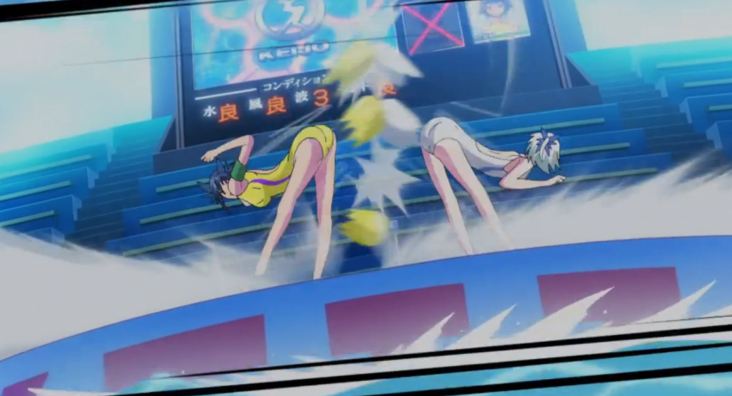 But Miyata has a trick up her sleeve, or bathing suit. She Gives herself a wedgie. However, this boosts her speed since according to Aoba, it takes away some of the strain of moving your butt around. But with that kind of power, Miyata wins, only to get injured by a serious butt cramp. 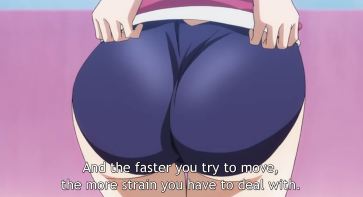 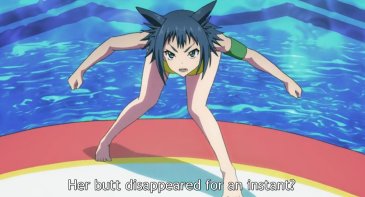 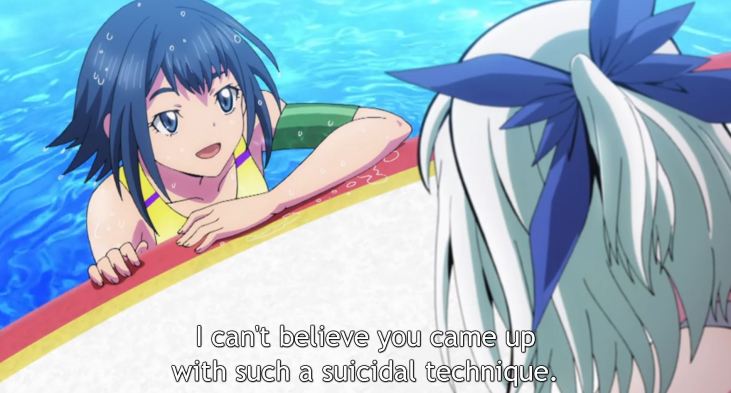 Up next is the clumsy Toyoguchi Non against the buns of steel Elite Member. How can I put this, while trying not to laugh? Non’s butt absorbs the Elite Member’s butt launching her out of the ring to win. 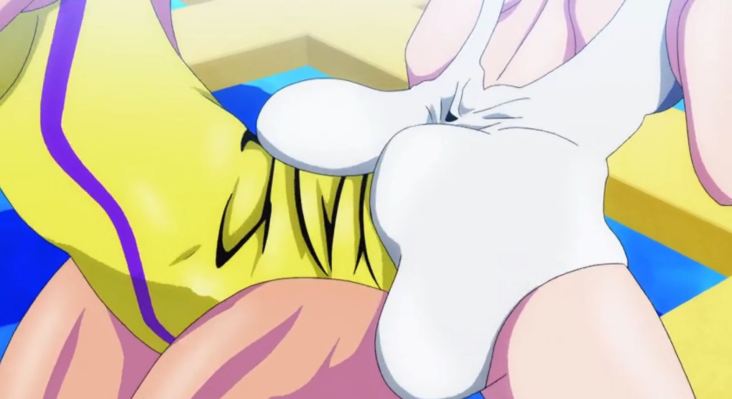 Then, last up for this episode, Aoba against the Rank 1, Mio. Of course Mio is pretty happy. If you remember in episode one she was pretty flirty with Nozomi. Well, I guess it is with all girls since she seems rather glad it is a three on one. Well, a one on one against Aoba at first. 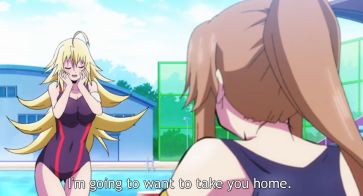 Of course, Aoba works together with the other girls against Mio. In episode 3, it sort of looked like Aoba was absorbing the souls of Keijo players through butt messages. Well, her “Scanning Hand” as she calls it, allows her to figure out the Keijo players strength and weaknesses, and she did that with every trainee at the school.

But although Aoba is able to get the advantage and corner Mio, and although winning is in her grasp, Mio starts to rock back and forth. Seriously, it is hard to say this show is a serious sport, with the move being used called “Titty Hypnosis” being used. Anyway, Aoba gets defeated because of this.

A quick hint for next time, Nozomi is up against the Rank 4, and she is on the run from the butt.

This show is honestly a sports anime, despite my titles for it. I honestly do not see any of this as fan service. I mean, yes I am a guy, so, this view could easily be seen differently by someone else of either gender. To me this show just not come off as a fan service show. There are fan service moments, but, it does not seem to come off as fan service.

Anyway, enough about that factor. This episode was certainly fast paced. I certainly did enjoy the fight between Rinrin and Miyata. It took up a good chunk of the episode, but unfortunately this seemed a little weird compared to the other two. Non’s fight to me seemed sort of like filler and a sort of joke fight before Aoba’s.

Aoba’s fight I wish was a little longer. But it worked. Although it did give some insight on Aoba, it really demonstrated both how powerful she could become and how powerful the strongest Elite Member is.

There was not really any solid overarching plot this episode. It was all about the fighting. It certainly worked, with little real problems. I honestly have no complaints, and even my thoughts on the pacing where minor.

Crunchyroll is streaming this in North America.

I rather enjoyed it. I honestly found myself laughing more than I watched episode 1 the first time. My only problem I have, but this is like it for every dub, the southern accent. Other than that the cast and writing were pretty solid. It was not trying too hard to do its own thing or have another dub issue like other Funi series have had in the past. But this was only the first episode.

It looks like that all episodes will be free after a week. So, although episode 2 came out dubbed, episode 2 will not be for free users until the third. So, that is still good.

Funimation is releasing the dub.