Well, this episode ends this arc, and finally reveals what I been really trying not to accidentally reveal in previous reviews. So, let’s stop beating around the bush and get right into it.

Continuing right where the last episode ended, it is revealed that Sleigh Beggies are an unlimited supply of magic. However, because of this, they are super fragile. They have no control of this so their bodies tend to cause them die rather quickly.

Despite explaining this to Chise, Alice and Renfred tell them that Elias knew and was deceiving her. They are there to set her free. Chise does not want this since Elias is the first person that valued her, and even saw her as family. Chise breaks free and saves the fairy, and well Elias does his thing to take care of the attackers. 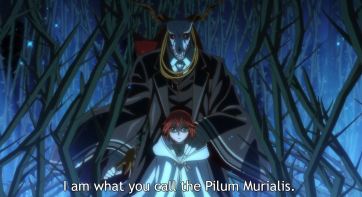 Elias then says he will manage the attackers, which we don’t see him do, they sort of just stop doing anything, while Chise deals with the corruption. She is then transported back to the memories.

There the husband is looking for the sorcerer that could help cure his wife. Chise notes right away that this sorcerer is not a nice guy and clearly has an alternative motive.

So, this guy really wants to save his wife, and well, he will do anything, which exactly what the sorcerer was hoping for. 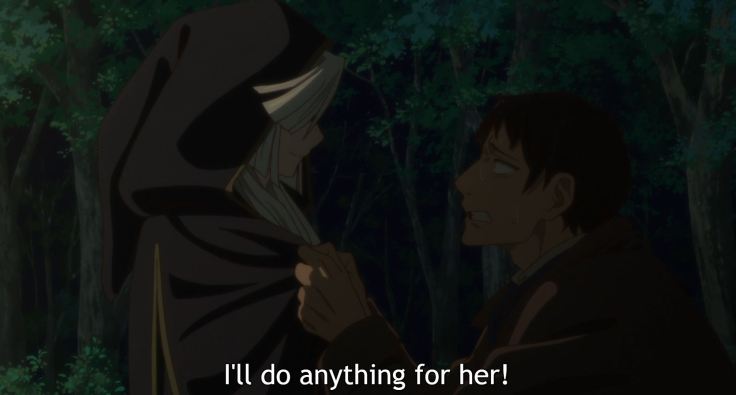 Later Chise tries to stop the wife from going into a building where her husband is. He is the cat killer. Well, he was told cats have multiple lives so he was trying to take some lives to make it so his wife could live. The wife is grief-stricken. But she is then forced by the sorcerer to drink the potion. Which she then explodes into goo. The sorcerer just walks away noticing this is a failed experiment. 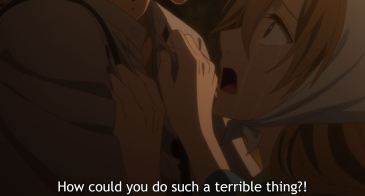 The man goes crazy and sees his cat nearby. Before he can kill it in hopes to bring his wife back. The cat kills him, says that he was deceived by a demon into becoming one. That cat is also the first cat king.

Back to reality. The wife apologizes to Chise for what she witnessed. She wants to be erased so she may die. Although now that she has been cursed for so long her soul may not return to the cycle.

Chise doesn’t want to. She quickly comes up with a way that may allow for the wife to return the wife cycle, which it does work. Imagining flowers and returning to the way things were.

The episode ends with Chise questioning this fact of death and when will she die. 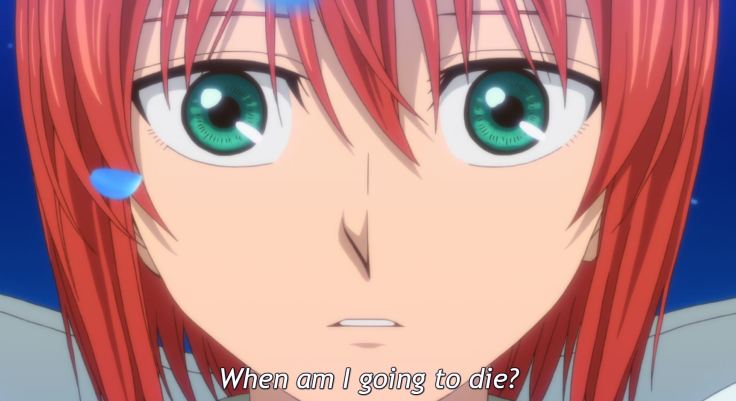 This episode did a nice job on the flashbacks and give more details to the previous episode. Sure, it could have focused a bit on the fact that Chise is slowly dying. However, leaving it at the direction of the current task was well-played. This is more for the fact that one, dealing with Chise’s short life span affects the series, rather than the arc that is going to end soon.

The ending did do a nice job bringing the direction back to this fact. With how all these characters are dying, and well Chise not wanting them to die. Not too long again Chise seemingly wanted to die and did not really care. But now it is rather clear she is afraid of death. But also afraid of losing people in general. She viewed herself as worthless and no one wanted her. But it is clear she does care for others in the sense that she does not want them to die because other people care for them. This is slowly starting to affect Chise as she is starting to feel a bond forming with Elias. She does not want to die, seemingly, because it could hurt Elias.

Elias isn’t great with people, which previous episodes have shown. I mean look how he met Chise, even then trying to tell others about it doesn’t work well. So, he is certainly a mystery in this sense of his feelings for Chise, as it still is a bit too soon to say.

This episode was overall decent. The art and imagery were wonderfully done and captured the manga nicely. The pacing was just right to give a fair amount of attention to this new information but still focus on what this episode was meant to be about.

Feel free to comment your thoughts on the series or Manga. (Try to keep mind of spoilers, for others who may read comments)