I am starting to think this series will cover to volume 8 of the manga. I really hope they don’t go beyond that, since Vol 9 is not going to be out until the summer here. At least I can read Vol 8 before the end of the series airs. Anyway, enough about that, and not wanting to be spoiled by the source, let’s get right into it.

So, last time Chise bumped into a girl at the train station, then the last few seconds of the episode we saw her again. Well, this episode has her running home, well, somehow everyone forgot she had a little brother, even her mom forgot.

Anyway, after the opening theme, Chise wakes up and well, her teddy is a little weird. A few magical crystals bloomed on its head. It turns out Elias made it special to absorb her magic while he sleeps. In the morning it turns into the crystal flowers. Ruth does note those may be useful.

Anyway, since it is Christmas, Chise opens some of her gifts. One to note is the gift from Angelica, which is a bracelet that pretty much prevents Chise from using and absorbing magic. 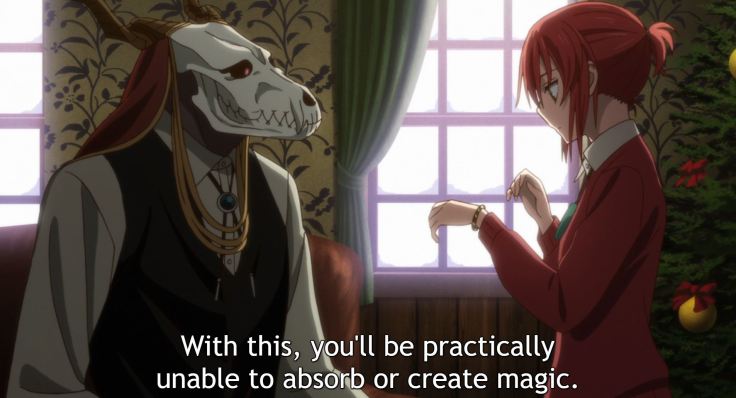 Chise then wants to go thank, at least Simon, but Elias tags along since he jokingly or not so jokingly says he wants to go with her, due to not wanting her to leave for London again. But, anyway, as they walk, Chise runs into the girl, who is still in a panic.

Well, Chise then finds out what is happening as the girl’s parents run by talking how they have no son and their daughter is an only child, while she said otherwise. Well, Chise meets up with the girl, Stella, and starts to learn a bit about what happened to her brother, Ethan. Turns out they had an argument, and then disappeared. Elias possess Chise to ask for compensation for helping, which is apparently in the form of sweets. Ultimately, they agree and also reveal that they have magic powers to the girl. 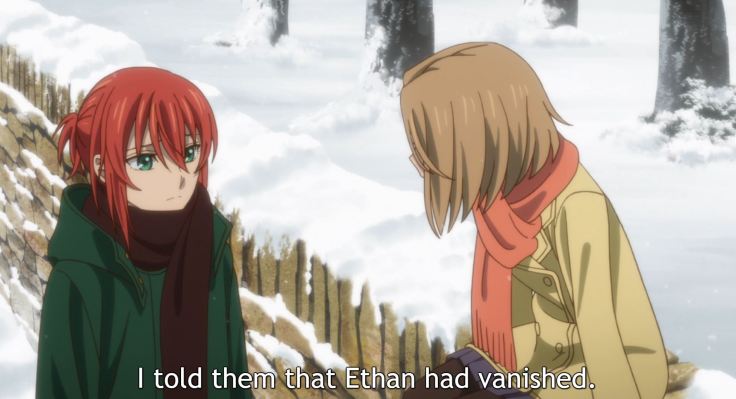 So, they go looking for Ethan. It turns out someone is interfering with them. But, Chise uses the magic flowers to get some help from the neighbors. This works for a while, until she runs out. She is a Sleigh Beggy, so they were helping for those crystals. It does get the point where she offers her own blood. 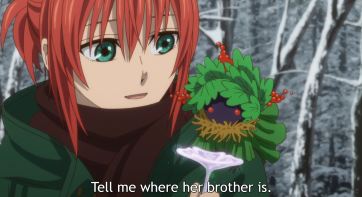 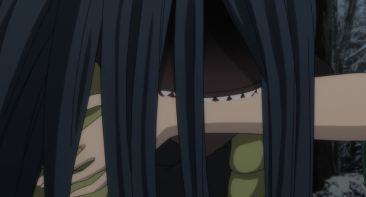 Eventually they reach an open field where none other than Ashen Eye is, he was the creature that gave Chise that magic fox pelt.  Also, he has Ethan. Stella starts forgetting who he is, and well, there are some other issues starting to appear. Namely how he take’s Elias and forces the girls to find them or he is keeping them come nightfall. Also, Stella said she doesn’t want Ethan, so those words were taken literally by Ashen Eye. 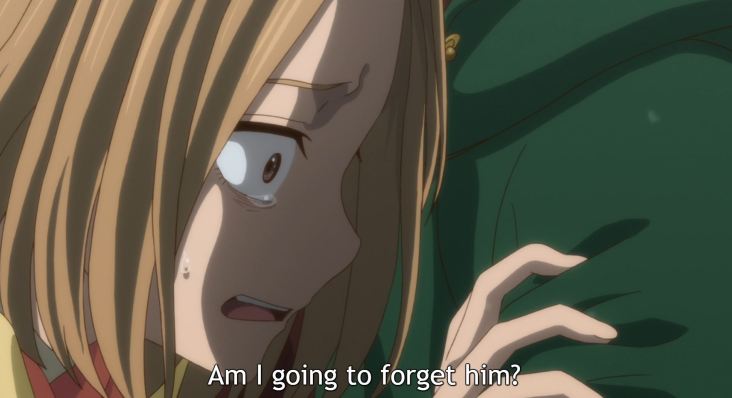 Chise gets an idea on how to find them. While she goes to get that ready, well Elias is not liking his predicament. He can barely move, he is dealing with a crazy powerful old creature, so he is seemingly powerless, despite being pretty strong.  Ethan like Elias at least. 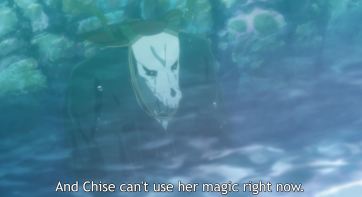 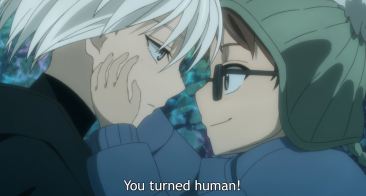 Chise turned into a bear, since she went back for that animal pelt. Well, she finds the boys. Although Ethan and Stella argue and are still annoyed at one another for what they said. 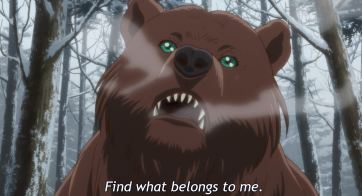 So, everyone then gets along, and goes home. Also, it turns out Stella now considers Chise a friend.

Where to start, probably how unlike the previous few episodes, this one was a continuous story. Don’t get me wrong, I do like how other episodes have handled splitting the episode to cover multiple chapters. This one just worked out better compared to them. This was two chapters, and two that happened to be part of the same story. Granted, two episodes ago one story affected another, but that is just how this show does things. This one, it was for the better.

After the previous episode, it was nice to dive back into magical elements. While it was not as crazy compared to some magical elements, this one certainly was different. Brining up how a Sleigh Beggy is, besides Chise slowly dying, was a nice touch. It had a huge impact out what happened this episode. From being able to find Ethan to even what Chise could do with some very limited magic.

There is also the nature of Chise’s gifts. While she is learning magic, it is also the thing that happens to be slowly killing her. So, while all her gifts reduce her magic in terms of both absorbing and releasing, her character is much more limited compared to recent episodes. This one may not have been the shining example of what Chise could do without magic, but it is a nice change of pace in showing a new issue: How can Chise solve a magical problem without using magic?

I find it odd that I am finding it tricky to say much about this episode. For once it came off as just average. Sure, there was that interesting new turn and there is certainly impact that we will feel next episode . But, it wasn’t as amazing compared to other episodes. The plot of this episode just seemed average and nothing more.