A Certain Magical Index S2 Episode 14-16 Review: The Queen of the Adriatic Sea 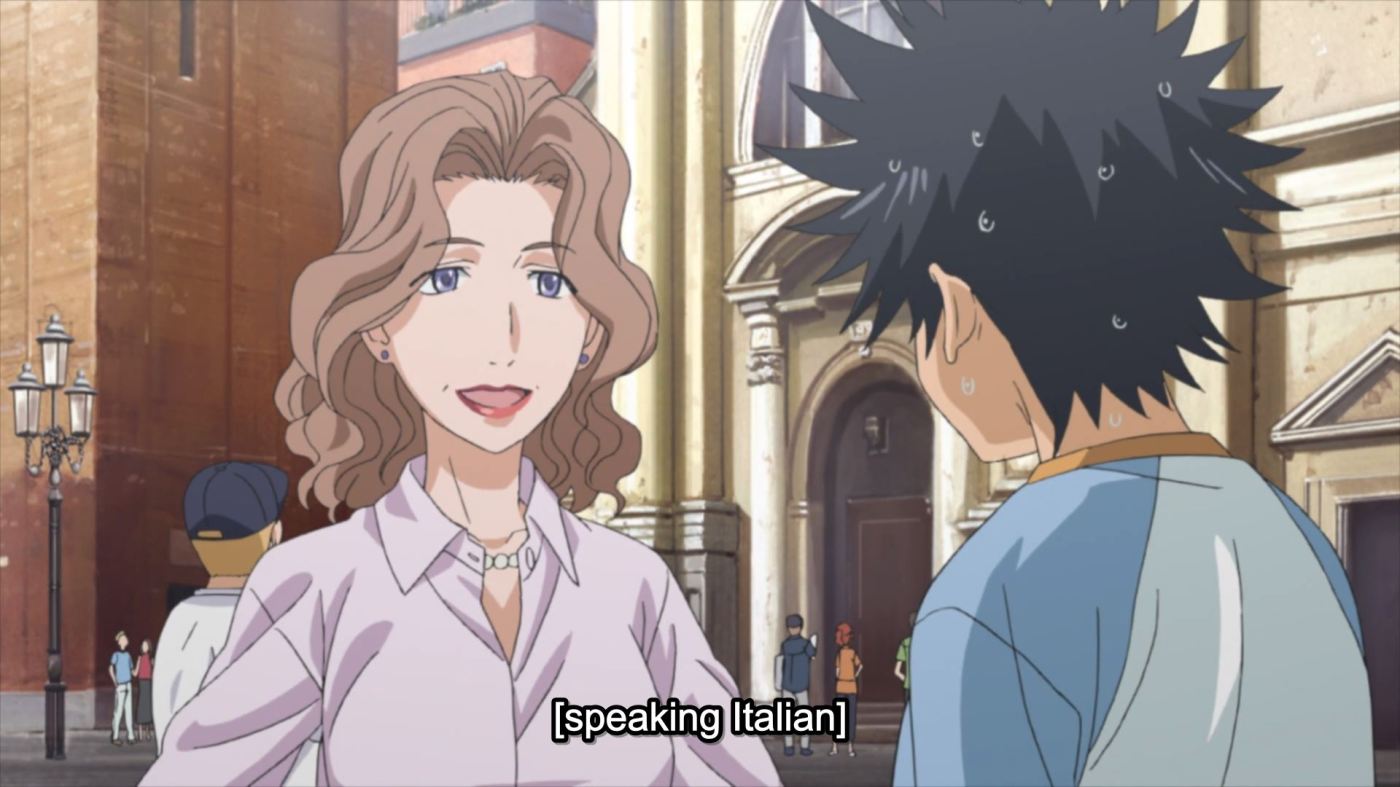 The final half of the second season. While the other arcs I had little memories of each part. This is the only arc that I remember a single scene, and nothing more. I might have remembered basic ideas and concepts for the other ones, but starting now, is where it becomes more fuzzy. Perhaps it is because I started the second half after a short break, or maybe because it took longer to watch than the first half. Either way, let’s get right into this arc.

So, since the end of the festival, Toma’s luck has not been the greatest. From walking in on his teacher, being hit by Asia, and while he did get to dance with Misaka, he got dropkicked by Kuroko. While he claims his luck is terrible, he wins a trip to Italy. 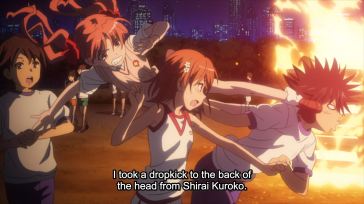 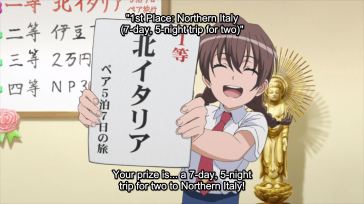 Minor issues start to appear. Toma saying he doesn’t have a passport, only not only for him to have one, but Index as well, as if this was all planed. 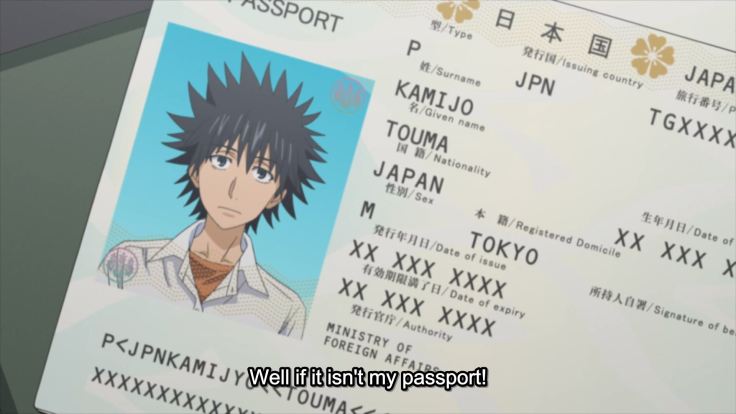 Once in Italy, things don’t turn out so well. Toma doesn’t speak Italian, and Index goes missing in her search for food. But, Toma at least runs into Orsola. Which honestly, is pretty good luck, he happens to be at the right place, meet one person he knows by coincidence in another country. 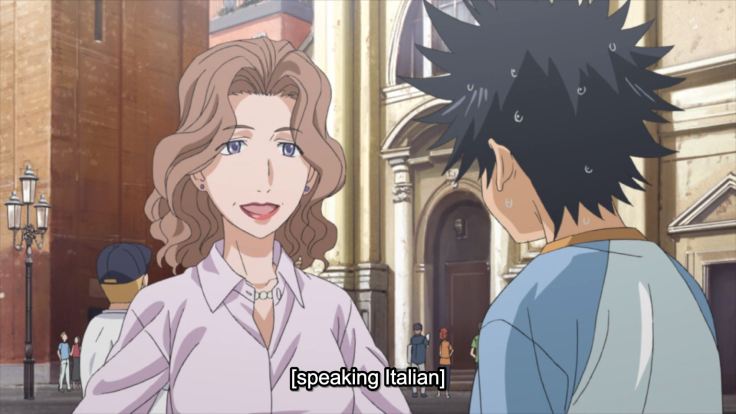 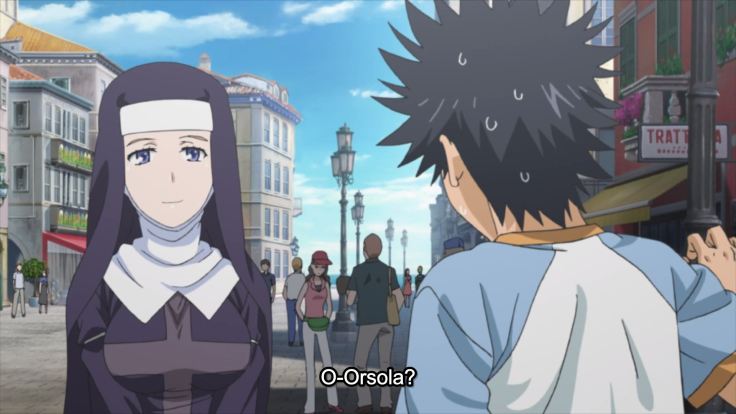 Anyway, Index is at Orsola’s place, so is Amakusa group. One of the girls seems to like him too. 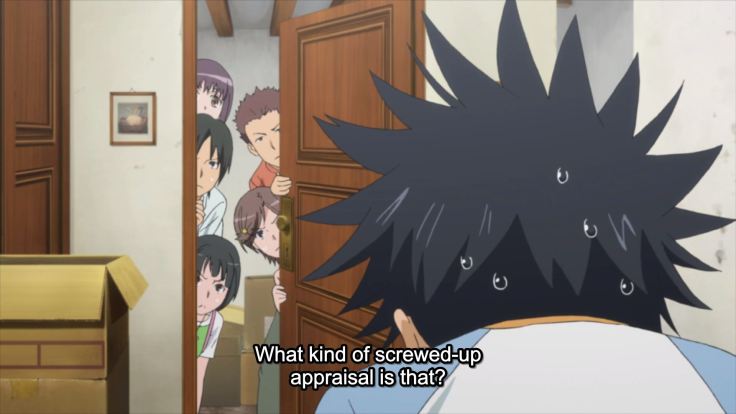 But, then there is the only scene I remember, where Toma nearly runs into the bathroom trap, only to find out there are two bathrooms. 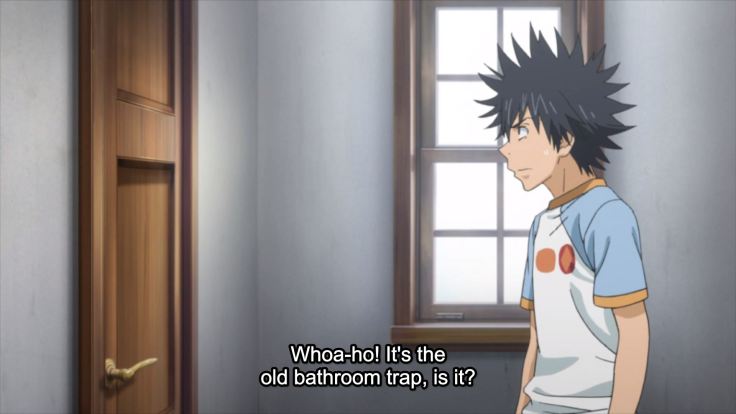 Once they help Orsola move, they are attacked, and Toma and Orsola find themselves on a ship. Index is left behind. This episode ends with Toma and Orsola in hiding only to run into Agnese. 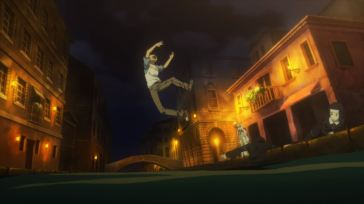 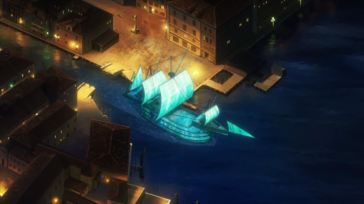 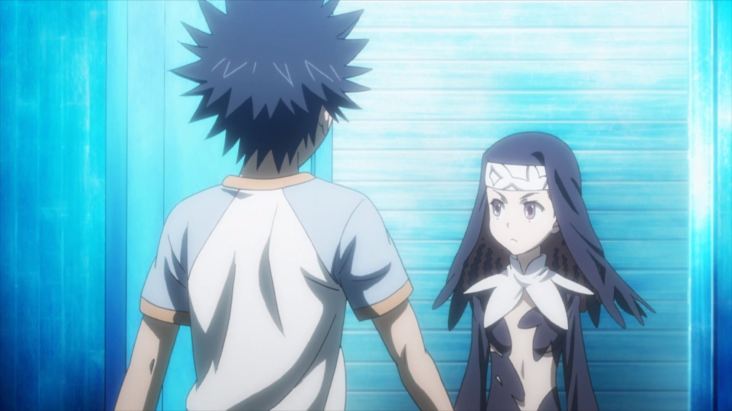 So, Agenese forces Toma and Orsola to do her bidding. Mostly since she is free to do whatever, but her friends aren’t. Since the last time we saw them, well, they got in big trouble. They are now off to go do labor and be prisoners. 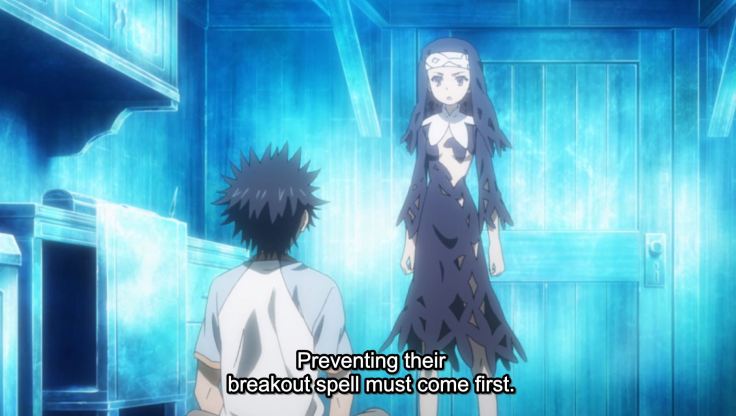 Luckily, Toma and Orsola find the two they are looking for rather quickly. That is until it turns out that they can’t use magic, and then the boat sinks since the other ships decided to shoot at them. 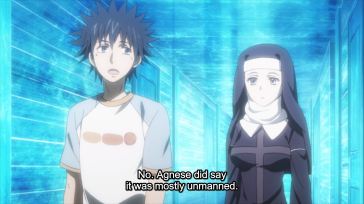 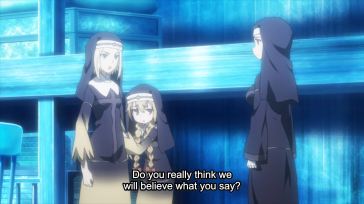 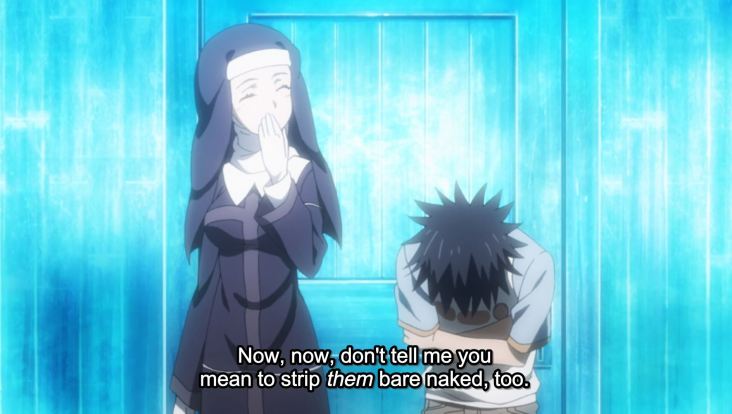 It turns out Agenese has a key role in all of this. She is the sort of sacrifice for a spell, “The Rosary of the Appointed Time,” she loses her mind, and the Roman Catholics can do some unknown at this time plan. 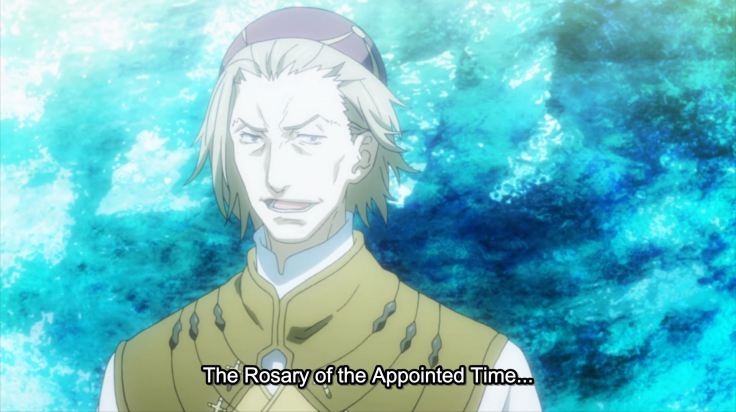 The Amakusa group saves Toma, and Itsuwa really likes Toma, turns out we will be seeing her a lot in season three, so much so she was in the preview, despite not having many speaking lines between this arc and the first arc with them. 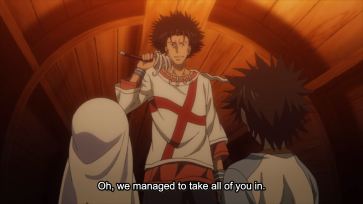 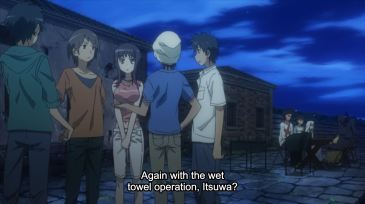 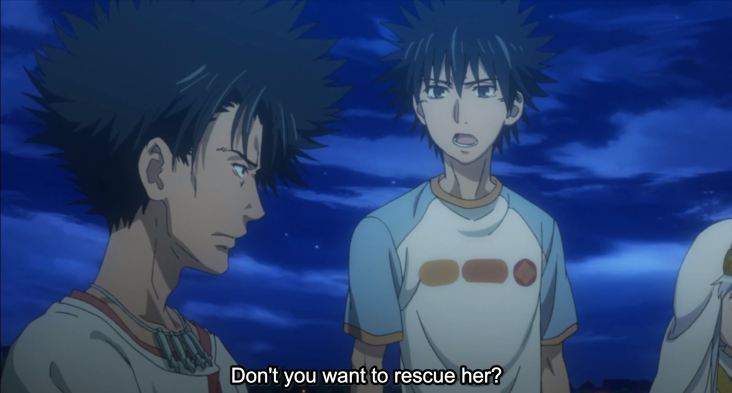 Anyway, the group goes into action to save Agenese to end off the episode.

So, after the group is attacked, Toma, Index, and Orsola make it to the main ship. It turns out since the main ship is so important, it is mostly made of magic. Thus, Toma’s right hand of destroying anything science or magic related is opening up doors. 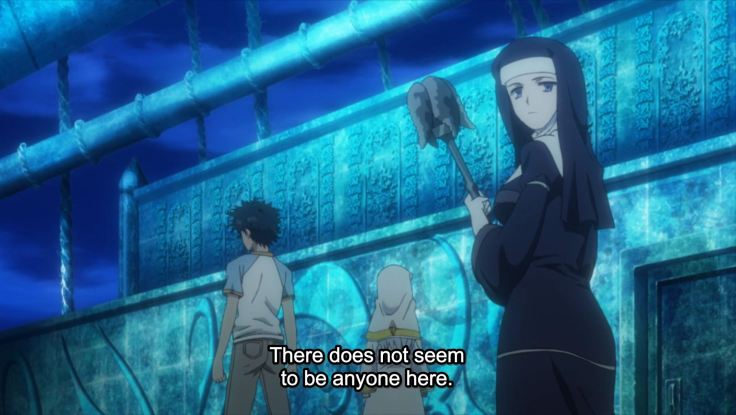 Although, it somehow brings him to a dead-end. Where he then creates another door way. I am not questioning it, mostly since something was probably lost in translation. 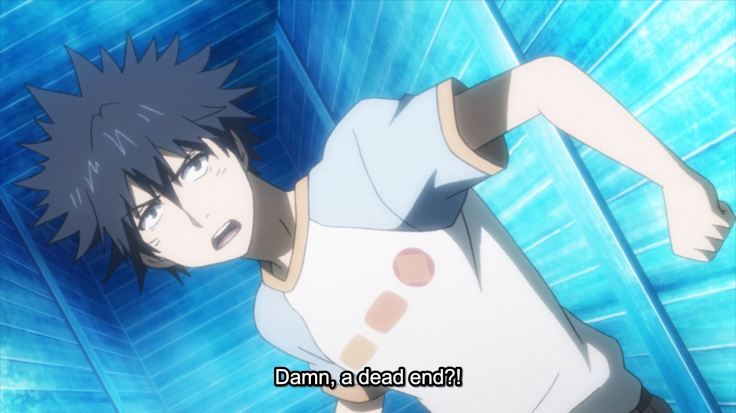 Toma fights the big bad, who finally appeared. He seemingly died, but more on that later. 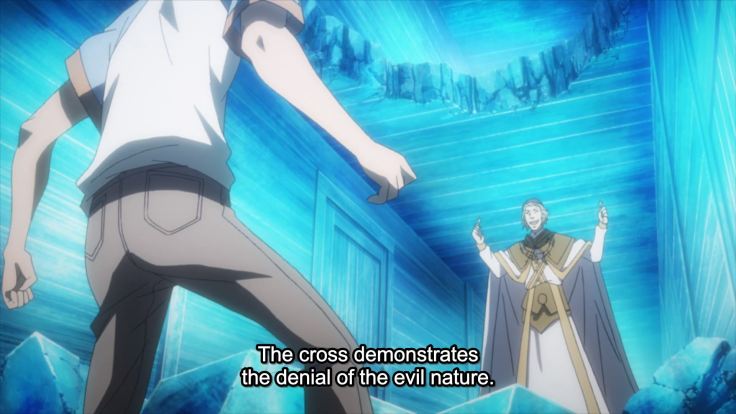 It turns out, no surprise, that the Apointed Time Spell has nothing to do with controlling the ships, but instead unlocks their restrictions of just being Venice only, so they could not go to Academy City and destroy it if they want. 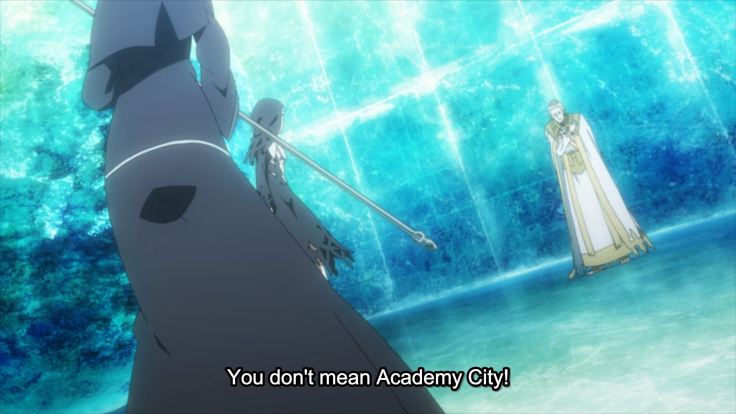 Toma comes back and taunts the villain, before beating him up. Fairly straight forward now for this arc. 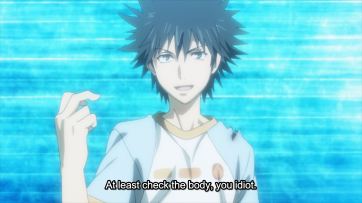 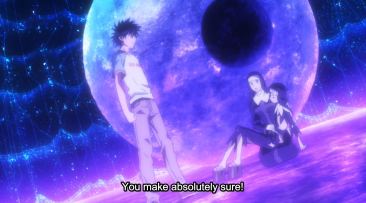 This arc ends with Toma’s vacation being cut short and being forced to go to the hospital in Academy City via a supersonic jet. 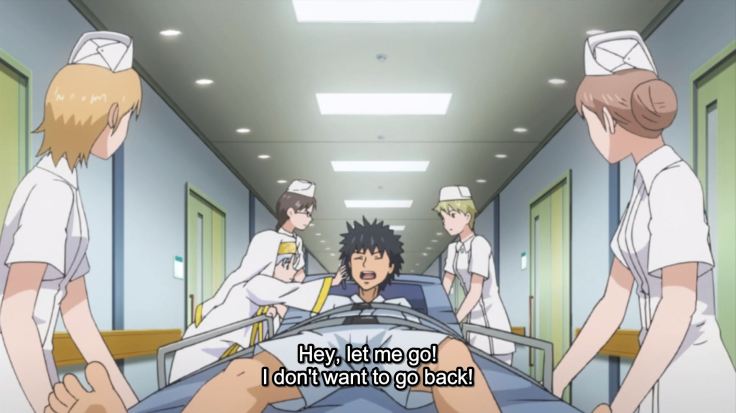 The ending was certainly weak this arc. It felt like it was thrown in there, and typical Index fashion it turns out the spell was not what they thought. I can kind of see why I remembered nothing for this arc. It is not that it was bad, well, it wasn’t good, it was bland. Nothing really amazing happened, and honestly for once I felt a little bored watching it. It felt like it dragged on at times, and in other cases felt like the action was just going a little too slow. It not only felt like something was missing, and now that I am reading the light novels more, it would not surprise me if something in this arc was missing. A whole villain was taken out in Angel Fall, and well, it does make sense since that villain played no role, but, it still feels like something was missing in this arc.

The ending felt weak, perhaps this is due to the previous arc and the next one covering two volumes and the villains are seen for some time, so the final fight has more momentum to it. This one, not so much, it became lack luster and overshadowed to the others. And this villain had some interesting tactics going on too. But, the big plans revealed in the last 10 minutes of a three-episode arc, feels thrown in there and rushed.

This arc was rocky towards the end more than anything. While it does start show the rising conflict between the Roman Catholics and Academy City that will play a major role in season 3, it does come off as one of the weaker arcs of the second season.

This show is over almost a decade old, so I may spoil future events. Either way, feel free to comment your thoughts on this series, and your hopes for season three.

This series is licensed by Funimation. Crunchyroll and Funimation have it legally streamed for free. Also Yen Press is releasing both the manga and light novels in North America.

2 thoughts on “A Certain Magical Index S2 Episode 14-16 Review: The Queen of the Adriatic Sea”