I swear the title was different, I just thought it would be funnier, I also thought I was going to last until at least episode two before having Butt jokes in the title. Anyway, after stating I will review this weekly since June, it finally aired, and well. I will say a few things about it towards the end, in terms of manga comparison, since someone I know has some knowledge retaining to the manga. Anyway, other than that, let’s get right into the new weekly reviews for Fall 2016.

The fierce battle between me kind of regretting doing this review and knowing I still need to say these types of things because the show deals with it. Anyway, Keijo, the sport that involves only using the chest and butt as forms of attack. The goal to knock the competitor off the platform into the water is the goal. Of course although people can bet on winners, the winners themselves get a rather nice prize. It is this prize money that makes Kaminashi Nozomi wanting to take part.

Anyway, Nozomi as a recent graduate of high school decided to go to Keijo school to become properly trained in the sport and enter competitions. Her friend, or at least seemingly, Miyata Sayaka, is also attending.

Keijo is becoming a rather well-known sport and plenty of the elites are getting interviews. Nozomi of course wants to get into some since she aims for the top so she can be the richest Keijo player. Of course with Sayaka being a former pro judo champion she is swarmed by press for an interview. 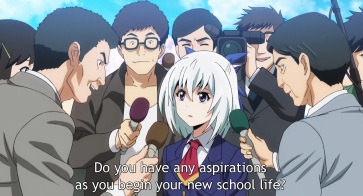 A girl goes up and talks to Nozomi, she is from the elite class, Hanabu Kawai. But, someone else introduces herself, apparently the best elite, I think, Mio Kusakai. Well Mio is a bit more friendly and well, a bit more playful to girls. Sayaka wonders why so many elites are interested in Nozomi. 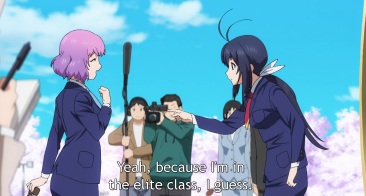 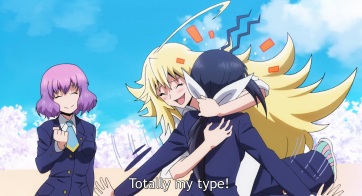 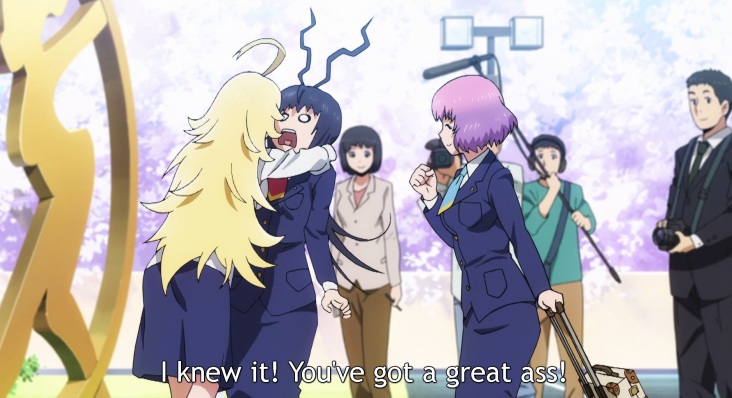 Flashback 6 months ago the final test to get into the Keijo school begins. It is a ten-minute battle on the LAND, which is the term for the platform on the water. Of course if you can surpass the elites then you get to be in the special classes and get a tuition cut. 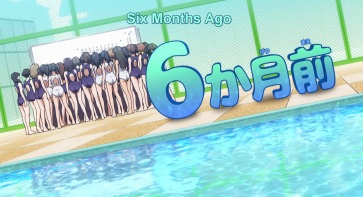 So the battles begin. Although at first no one wants to move on their own land due to the pathways between them being narrow and a lot less sturdy. But this does not stop Nozomi from charging into attack. 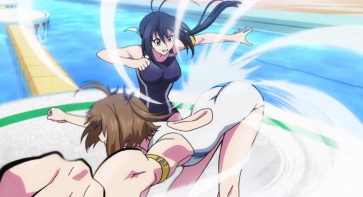 This does not last long as her opponent knocks her back only to be cornered but due to her years as a gymnast she flips a few times to escape. Only to quickly charge in for a counter attack knocking two girls out in the process. 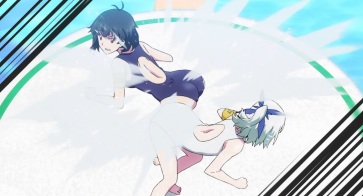 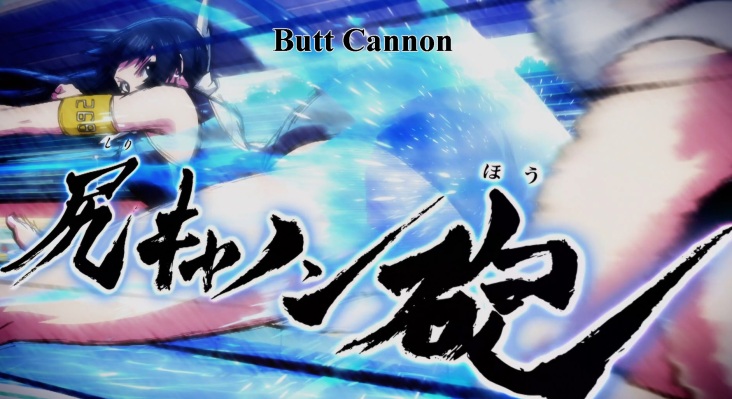 Sayaka gets cornered by three girls, and well although they target her due to her judo abilities, two are taken out fairly quickly. Meanwhile Nozomi again gets cornered and outnumbered. But Hanabu shows up and takes one of the members out. 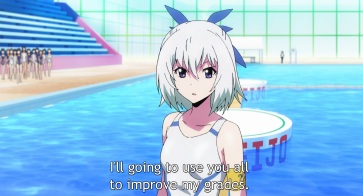 Hanabu is quick and knocks out the girls instantly. Nozomi however saw through the trick and well, took Hanabu butt blow right to the face. 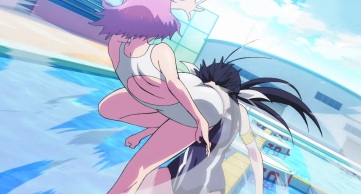 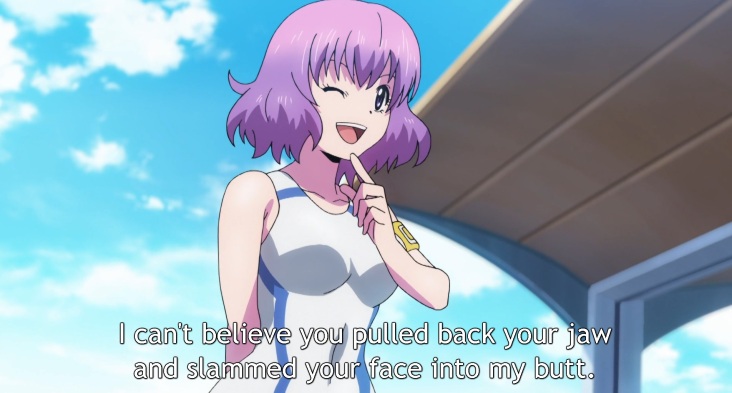 With Sayaka her fight gets quickly turned around when she pretty much goes so fast there is a mirage of her and her butt replaces her boobs to knock out her opponent.

Back to Nozomi the fight goes back and forth, each using special moves and ways to counter one another. Ultimately in the last 30 seconds Nozomi gets hit and misses her attack on Hanabu, getting knocked out. But as she fell into the water she realized how much fun Keijo really was. 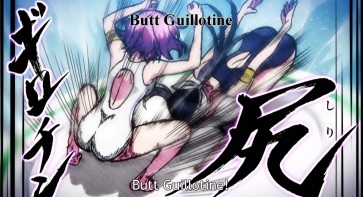 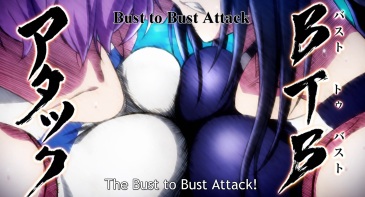 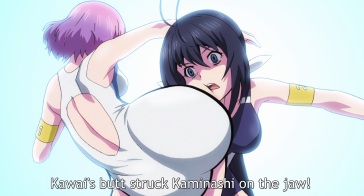 Back to the present, Nozomi tells Sayaka that she originally wanted to do Keijo to travel and obviously for money. Sayaka says why she wanted to join was for the cute swimsuits.

Then the two go to their dorm together, which they happen to share the same room, dubbed “The Empty room” since most people fail go in that room and leave quickly.

There they meet their two other roommates. Toyoguchi Non, a very clumsy girl, and Aoba Kazane, a silent girl. 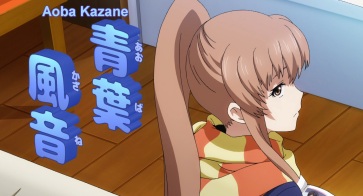 The episode ends with Ujibe Nagisa aka Siren preparing them for training.

I did check out some of the manga a long time ago. Well, they skipped about 20 or so chapters, all the starting ones pretty much. This was training to get into the Keijo school. Of course I did not mind this, since it would have been a few episodes to cover and would have not fit well for the first episode. This throws you right into the sport.

There was also some information left out, more specifically with the Hanabu and Nozomi fight. This would have made the show not seem as ecchi as it is and more sports like. Hanabu is a former softball pitcher, and because of this she could move as quickly as she could Her legs from throwing the ball are really strong which explains how she could go those distances. I mean this would have been a bit better to make people realize, “Wow this is a sports anime,” than what the previews made it out to look like. Also the fact Nozomi is poor which is why she wants money and fame, but that will probably be brought up next episode.

Besides this, since this is its own thing and separate from the manga, it was still enjoyable. A lot less ecchi than expected and I am glad. It is also really extreme and random, well I have to admit some of the lines were so fitting and yet, just wow I cannot believe that they actually happened. The action was well done, and well, if certain information was explained it would have been known better to be more believable. Either way it was still funny and entertaining.

My only real complaint is at times the animation looks a little pixelated. Other than that this show I am going in not going to take everything fully serious, but not taking everything as a joke. This show could go either way, and personally although with the ridiculous means of what this sport is I do hope it gets to be more serious to serve as a surprise to those expecting it not to be, including myself.