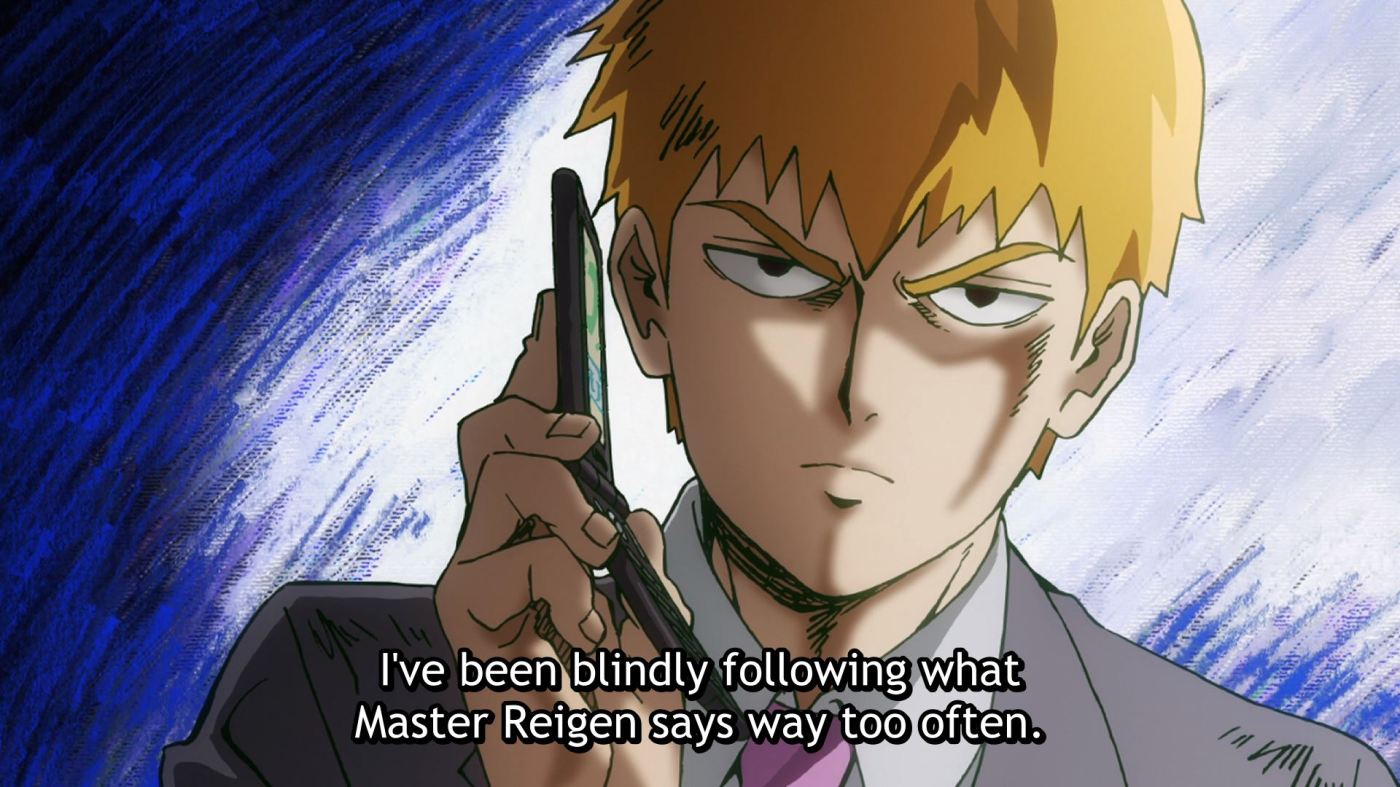 A Reigen themed episode, and one that honestly went in a direction I did not think it would. Also the cause seemed to be one that I did not see coming as well. Either way, let’s get right into it.

So, a brief flashback to four years ago, Reigen quit his job and moved into a new place. He was uncertain what to do exactly, when ultimately, he decided to go into the psychic business. 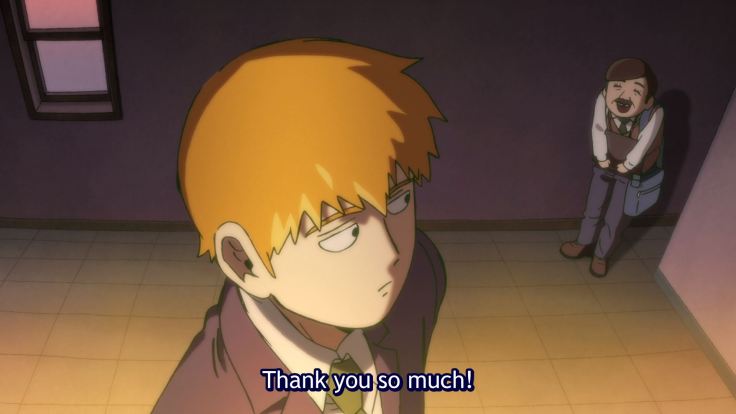 Present day, Mob is working out in his fitness club, which he is breaking all kinds of records, finally being able to do thirty-five push-ups, his clubmates believe he will get to an average student’s capabilities soon. But, while they celebrate they realize members of the Telepathy Club have birthdays recently, since they are still sharing the room, so the two clubs decide to go out and celebrate.

Reigen on the other hand is rather busy with work, his popularity has been rather high lately and has one job after another. So, he thinks about calling Mob. 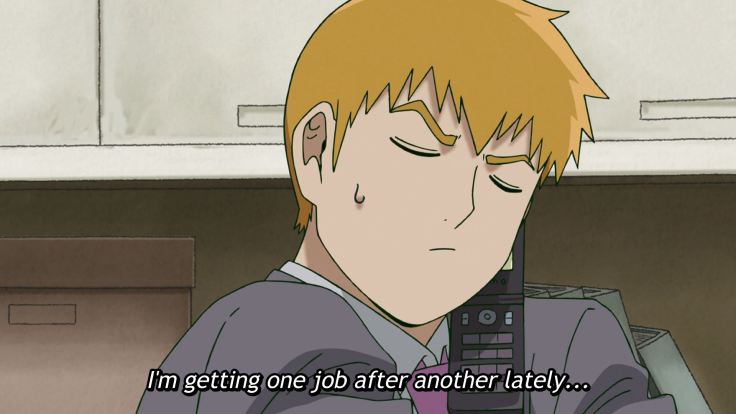 Mob however, having fun and enjoying some social time, even going as far to say no to Reigen so he may go to karaoke with his friends. Ultimately goes to help Reigen. Where, after vanquishing the evil spirit, the two argue. Mob says he was having a social life and Reigen responds that those people are just using you and he needs to be so trusting in what people say. 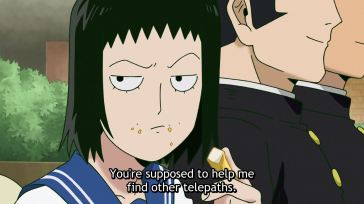 The following day Mob does not show up for work. He took what Reigen said, and seeing that he always believes in him, Mob thinks he needs some time on his own. He knows he cannot rely on Reigen forever and needs to take time to himself because of it. Reigen on the other hand feels like there is nothing to worry about since Mob will be back, without him he will be lonely. He does not need to worry about the work, since after all he did build the business himself and Mob did not appear until a year or so ago. 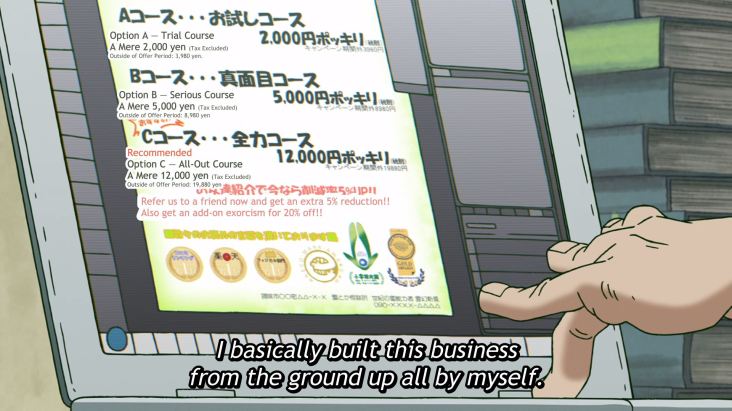 While Reigen believes Mob is currently miserable and will be back soon, these expectations are quickly shattered when he sees him happy and with friends when he passed by.

Distraught, he heads home and after updating his website he goes to look at some messages, some reminding them that it is in fact his birthday. His mom sends him a job ad, and well, this makes Reigen’s mood plummet. He goes out drinking, but that certainly does not help. He feels as though he hit a low part in his life.

Thus, begins the start of him turning it around. While he still takes on his normal jobs, he cleans the city, helps with various things, gives advice, free seminars and really does a one-eighty. His popularity skyrockets, which ultimately leads him to a TV deal. 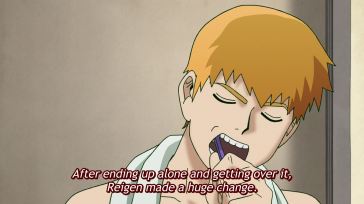 The day of the show, well, the old psychic guy is also there. Turns out he was not too happy about getting kneed in the gut by Reigen two episodes ago. Besides reading Reigen’s mind, his plot to get revenge is starting to set in motion as the episode ends.

The fight between Mob and Reigen seemed well, honestly, I thought Reigen was possessed. Given their overall relationship and how strongly it has been growing this season alone, it felt out-of-place and forced. But at the same time, Reigen quickly acknowledges he messed up and is still growing into his ever-growing role of being Mob’s role model. Mob also took it a different way, and honestly it did help this seemingly forced side of Reigen. Either way, it was turned into a means to allow for both of them to grow as characters, Mob trying to find independence and Reigen well, being who he is.

It was nice to see a different approach to this series, and certainly next episode does show some promise of Reigen’s change, a lot is on the line in some cases. Granted Mob and him will make up, that much is a given, but this episode helps demonstrate the side of Reigen we haven’t seen yet. In a way he does have himself set up on a pedestal, that people rely on him, Mob, the bar folks, and a few others. But Mob being distant from him, and how on his birthday he realized the bar folks are nothing more than people he helps. He believes that the people around him rely on him and this wake up call clearly says otherwise. It was a nice way to introduce this character development for him and see that side that we kind of know is there, but rarely see.

Either way, fairly decent episode, and just goes to show it is not just Mob who is growing as a character trying to find his place, but Reigen too.

Crunchyroll has licensesed this series, Dark Horse Comics is now releasing the manga in the US.

As always, feel free to comment your thoughts on the episode or series, just keep in mind of spoilers for the series, and spin-offs too.