Mob has changed a lot since the beginning. Now that I am now reading the manga, it is kind of obvious to see the change. The last few episodes certainly did help with this change as well. This episode was a great way to visit the past and how he used to be. More on that in a bit. Let’s get started.

So, the guy Mob is fighting is Serizawa. He was a shut in for more than half his life when the big bad showed up to help him. He was bullied when he was younger due to his powers, and because of it feared the world. But, he is like Mob and does not wish to hurt anyone. The two still fight though. 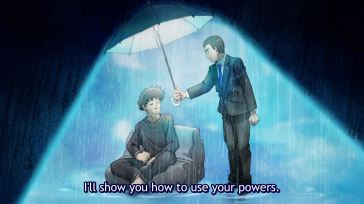 There is a bit back and forth with Mob trying to tell him that he is just being used and nothing more. He is causing harm to those around him and it is not looking good. Serizawa is in denial. He tells Mob he does not wish to listen to him. Thus, rejecting everything Mob is saying. Mob goes to 100 percent, this time as Friendship, and sends a psychic blast that reveals what he has went through. This calms Serizawa down and the two can talk. Serizawa is certainly grateful for what Mob did, since he views happiness brought by the misery of others is not worth it. 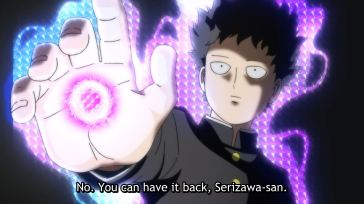 Back to Sho and his dad, and it turns out Touichirou has the power to not only lend people his power but also absorb people’s power. Which makes him really strong. He truly believes he is the protagonist of the world. He goes to beat up his son some more, and that is when Mob shows up.

Of course, while Mob tries to talk to him, and convey some of the lessons he learned. He does lend Sho some of his power, which causes Touichirou to see Mob as not only an enemy but the biggest threat because of that power. He also kicks away Dimple. 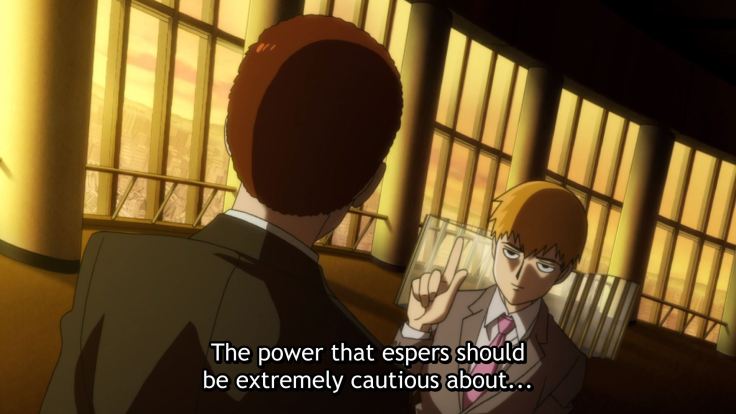 Touichirou talks like how he is the strongest, no one can defeat him, everyone is a defect. With no one having psychic powers strong enough he decided at Middle School he would take over the world. Mob responds with how it is the lives of everyone else that affected him and allowed him to grow. Mob then gets beat up a bit more.

Reigen then shows up and as always uses his way with words to get close to Touichirou. He tried to punch him, but it did not work. Touichirou responds with nearly killing Reigen, but luckily Serizawa shows up to save him. The two are then thrown out of the building.

Mob is certainly enraged by seeing Reigen nearly killed. So, his 100 percent is now anger as the fight really kicks off with Touichirou since Mob now sees that talking will not be the solution. This episode ends with Touichirou saying he is only using 10 percent of his power, but Mob said he certainly has a plan. 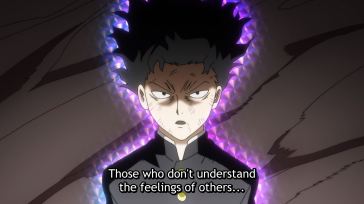 Now, when I think about this series, I don’t really see a lot of major fights. The final moments of this episode to me, felt a little odd, Mob was more focused on fighting than anything. Despite this I do like the reasoning for this change. Mob even started with the talking approach, that is who he is. He was really putting the weight of his words using the lessons he learned.

But, while Claw has not being super involved in this series, mostly last season finally and now the final arc, the villain is fitting for this series. He is a foil for Mob and is by every means, Mob’s opposite for where he stands now. Mob relies on others for the change that brought about in him, while Touichirou’s power only got stronger because of how he sees himself and wants nothing to do with others.

So, am I upset by the lack of Mob fighting? No, I am not. How this episode was certainly fitting for how this show is. Granted Touichirou’s motives are certainly lacking, but, at the same time if they were any grander, he would have been around in this series longer. He is severing more as a final hurdle for Mob than as a genuine villain.

Still, next to last episode of the series, certainly had its impact, and still bringing everything in Mob’s journey to an end.

Crunchyroll has licensesed this series, Dark Horse Comics is now releasing the manga in the US.

As always, feel free to comment your thoughts on the episode or series, just keep in mind of spoilers for the series, and spin-offs too.