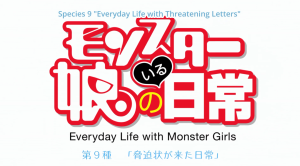 I know I said this the other day with the Actually I am Review, but it is hard to believe that these shows are almost done. In all honesty with this one with how much I love the manga and anime I am going to need to reevaluate my top 10 favorite anime since this one would be in there. So, I guess with that said, let’s get started and spoiler warning as always.

So, this episode deals with the girls following Kimihito and his date with Ms. Smith. The two go to a few places. In the maid café Ms. Smith wanted to check out. She talks about how terrible the coffee is while Kimihito notices one of the maids there resembles Mero, who he then immediately dismisses because Mero cannot walk. However it really is her, using Suu as the means to walk and as a disguise for the outfit.

This happens several times with the girls following them around. Papi as a cosplayer, Miia and Cerea as to workers at a small cart. Eventually Miia ultimately goes into Snake mode and hides under a Suu shaped box to spy on them. This ultimately comes down to Rachnee showing up and telling her that she is also following them, specifically to the love hotel that they are currently at. She wants to use it as blackmail since it would make Ms. Smith as a coordinator look bad. Miia just wants proof that they are not really doing anything. The two fight as they make the way to the room, through the outside that is. Before busting in and having MON being there at the ready to shoot. That was when they found out Kimihito has a target on his life for if he were to marry one of them. So the search for the D begins.

The second half of the episode deals with Miia and her date with Kimihito and Mero is with them. Miia feels as though Mero is getting too much attention, ruining the mood at certain times when they are romantic in the aquarium, which she got them in for free. Miia ultimately leaves at one point only to meet another reptilian like monster. They talk for a bit about common problems they both have. Miia leaves with them and as Miia starts talking while they are on a small boat on the lake, they snap and are tired of Miia talking about Kimihito. Miia thinks they are the D. Kimihito comes out of nowhere on a paddle boat and sinks theirs. He saves Miia and goes to help D. Only to find out they are not D and that male was actually a female looking for a friend. 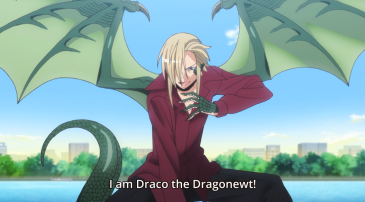 I really do these chapters, and the chapters that will be coming up soon. This is the first sort of Arc in the series. Anyway, I do like how this episode was handled. It really comes down to the second half and more for the society as well as other monsters, I guess. The first half was more for a little bit of laughs, the second half dealt with a romance aspect, which tends to always be harder to pull off in harem series. I think the reason for it, is because if a 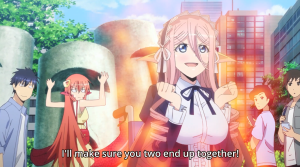 romance where to develop, then the harem would collapse and the series would be over. Anyway, it was well-played with only having two of the girls with this half instead of all of them, that way the romance element can be present without five of them trying to do something to prevent it. It was even better with Mero since she just wants a tragic one-sided romance. Then came the other monster girl who was introduced, she does make at least one or two more appearances in the manga after this. Anyway, her acting could say a lot about society, but it depends since not much is known since she is a side character. But a few of the lines that she said can be a little bit of a world building thing. Such as how the super market and other places are not made for certain species. I just thought I would throw that out there. The plot is starting to show itself a bit more now with this episode. I can see how it will end with the looks of Lala appearing at the end of next episode.

Cruchyroll is streaming this series and Sentai Filmworks have licensed it for North America.

As always I would love to hear your thoughts and I hope you enjoy.