Alright, I still have no idea how many episodes there are in this season, since the two main places I look still don’t say. Either way we are more than likely at the halfway point. With the events of the third volume wrapping up last episode, time to kick into another with new events, although we can expect the same group doing exactly more adventures. Either way, let’s get started.

It is now spring time, and well, no one wants to go outside, especially Kazuma. It turns out that after they defeated Vanir in the previous episode, they wished to tell Wiz of this information. Well, they got something they did not expect.

It turns out Vanir lived, in fact he only lost one of his three lives. Although the barrier around the Devil King’s castle is now weakened, he now works with Wiz in her shop. He also struck a deal with Kazuma. Kazuma gives him objects from his world to make, and they both make profit. So, now they both have money. 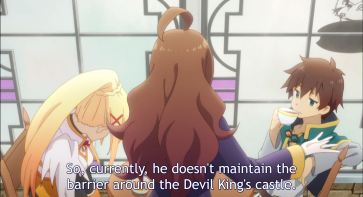 So, Kazuma likes staying where he is. And he does fight to stay there.

Ultimately, when he is thrown outside, he goes to the smith shop. He learned smithing skill some time ago. Well, he also ordered a Katana at the same time too. It was done.

So, Kazuma tries to think of a name for it. Unfortunately, while they were accepting a question, Megumin named it Chunchunmaru with some magic, so Kazuma sword now has a silly name.

Then while on the quest, Kazuma explains the plan flawlessly. But Aqua screws it up by getting all the lizards attention. They just needed to kill the princess lizard, but well, it became harder when they charged at them. Darkness and Aqua getting trampled in the process.

Kazuma however snipes the princess. But the giant lizard breaks the branch he was standing on. He falls and snaps his neck, dying yet again. 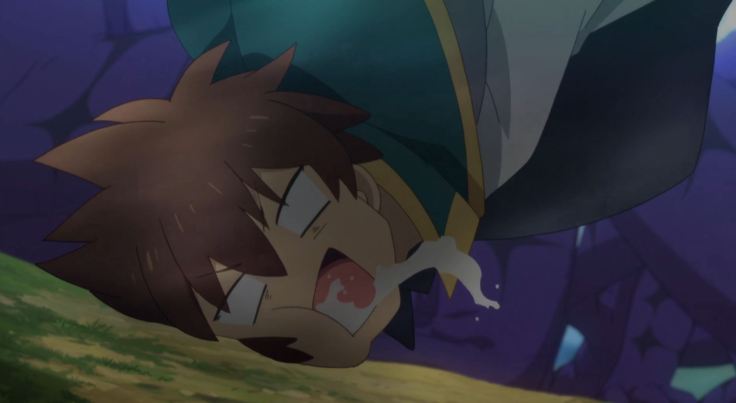 Thus we get to see Eris again. 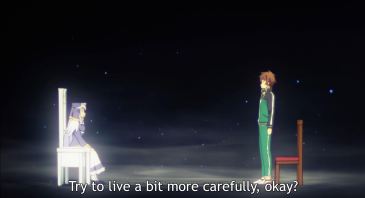 Kazuma also gets feelings for her, she is a kind girl, and he is surrounded by, well, it is obvious. 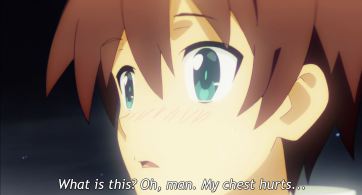 Aqua however does not like Kazuma staying there for too long and orders him back. Kazuma even asks Eris to be reborn as a baby now. But this is no series finally, so Kazuma goes back to Aqua and everyone. 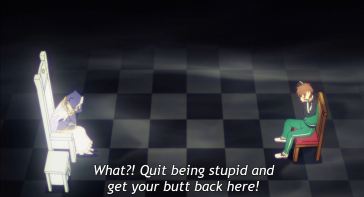 Megumin also apparently wrote on Kazuma when he was dead. Thus ending the episode. 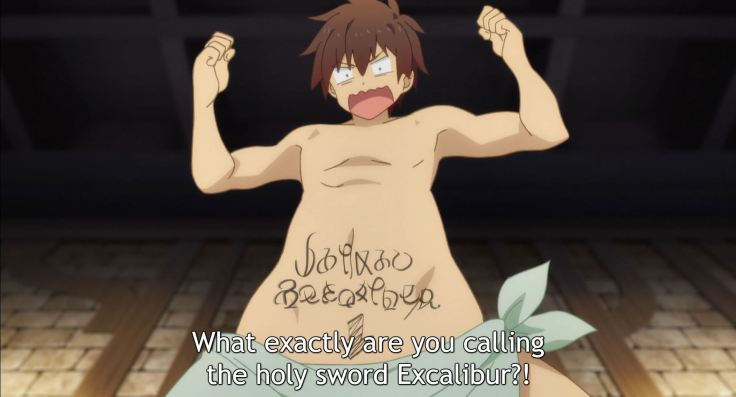 Fairly good episode. Although, it was certainly clear this was the start of a new volume. Still it felt like not a lot happened this episode. I mean it certainly set up what is going to come, but Konosuba, now 16 episodes total, is starting to feel like they have a pattern of doing things. The first episode sets up a problem, two episodes of random events, and then the big bad shows up. It is fairly that straight forward. It is nothing wrong, it is just predictable at this point. The show is still funny, but some change in direction would be nice.

But this is still a new start, so maybe it will change now. I mean Kazuma is getting money now, so I don’t see why not.

This was not a strong episode, but it was not a weak one too. There have certainly been funnier ones. In all honestly I was enjoying seeing Vanir some more. Either way, I just hope this show is not losing its luster now.