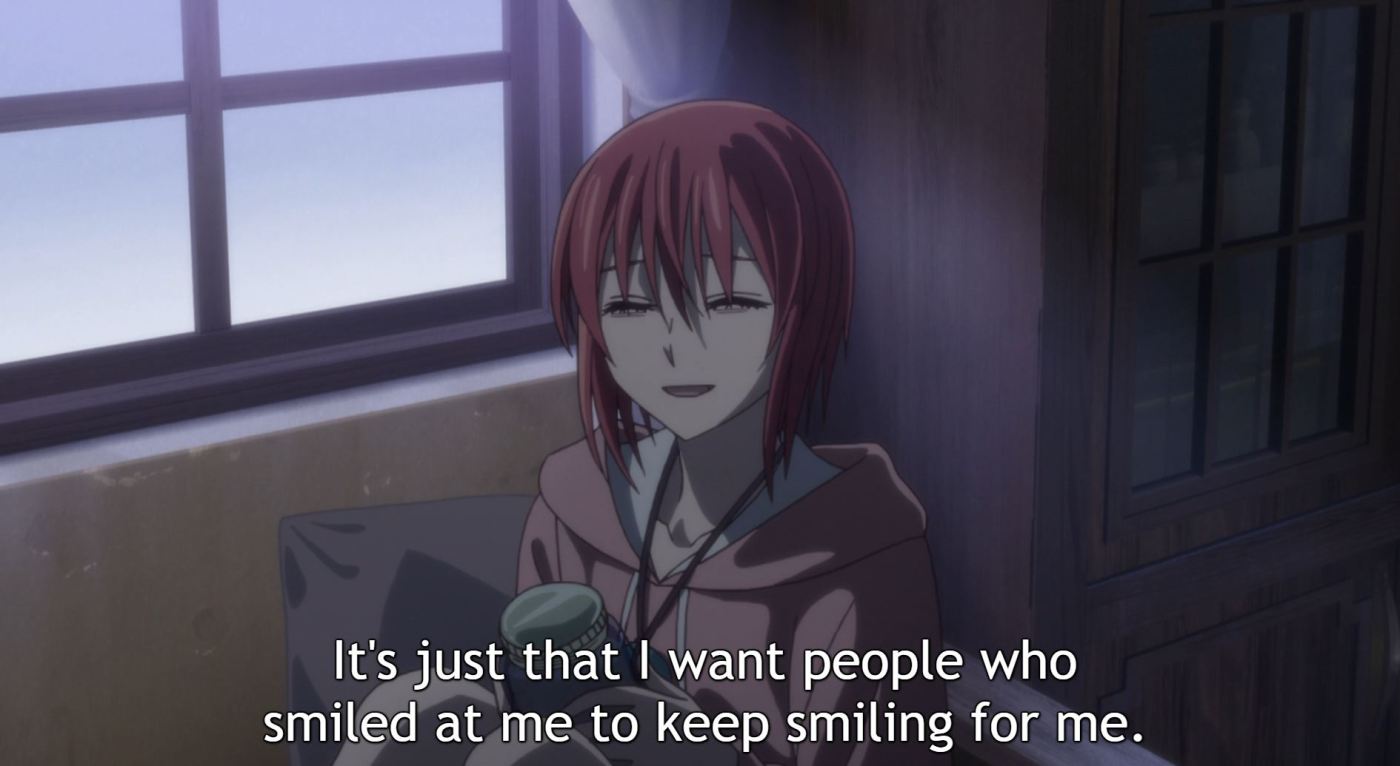 Despite reading the manga and knowing exactly what was going to happen this episode, it certainly does not slow down the tears from the emotional impact this episode brought. Although, to me, this felt slightly rushed, the consequences will affect the next few episodes. So, let’s get right into it.

Well, here is the rushed part. The previous episode ended with Chise turning into a fox. Well, this episode she runs away. The old man tells Elias that she will decide where she will go to make her home. Elias really does not like this guy, mostly since he knows if Chise leaves he will feel empty. 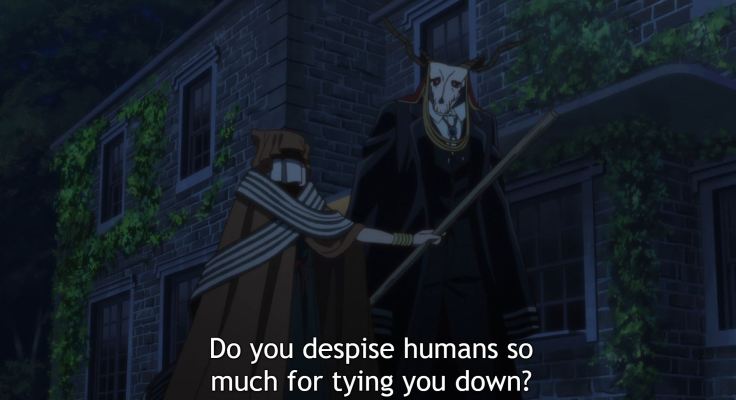 Elias goes after her. But, Chise, she is rather enjoying it. She does show signs where, it honestly feels like she has no memory being human, and simply wants to run and be free. Luckily Ruth starts to talk some sense, or at least ask her the question if this is what she really wants, and if she is okay leaving where she came from. She becomes confused, and before long Elias appears in a beast like form. He tells her how he needs her and without her he will feel alone, and does not want that. This was able to snap Chise back to become human. 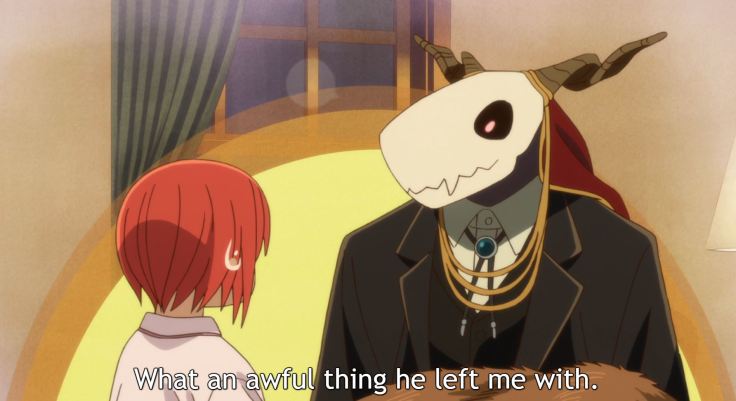 Later that night, Leannan Sidhe, appears shouting at Chise to save Joel. Now, Leannan Sidhe appeared back in Episode 9 along with Joel. Jeol is an old man, and Leannan Sidhe is pretty much a vampire who loves him. 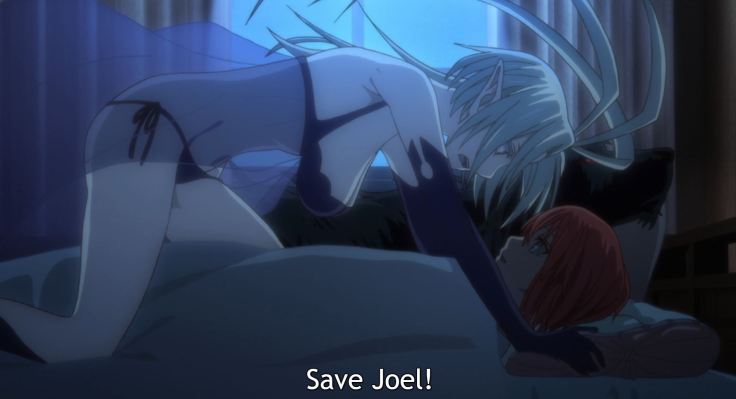 Chise makes it to Joel’s place, only to find out Joel is dying. And Elias being Elias, follows Chise only to then blame Leannan Sidhe for Joel dying.

Thus, the emotional drama kicks in. Chise talks to Leannan Sidhe, and well, she is in denial about her love for him. If she were to love him, he would need to follow through with that love. But since he cannot see her, he has no way of doing that. 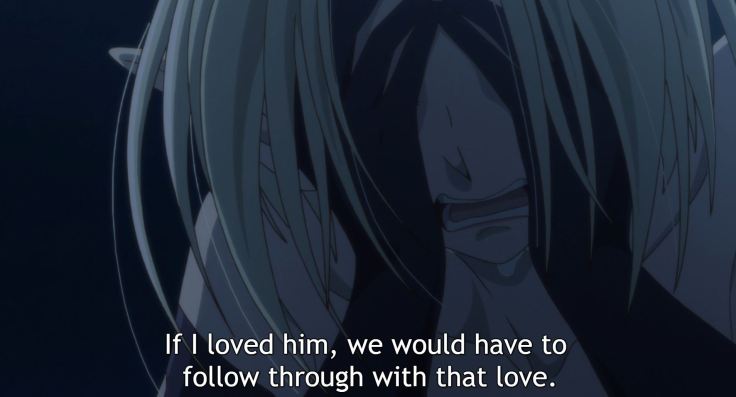 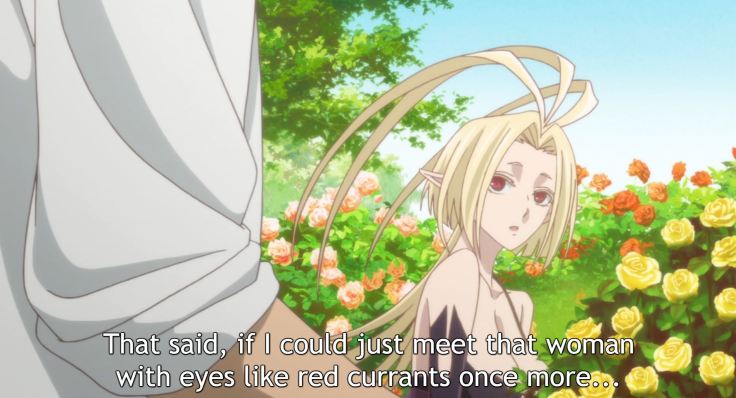 Chise has the idea for a Fairy Ointment. The picture I pointed out last episode, and it did appear earlier in this episode. Well, that allows people to see the fairies. Normally, Elias would forbid Chise from making this, since it is considered a taboo, but, this was Chise’s first demand, so he just does not want her to push herself. He also cannot help her too.

This of course will take five days to make. She must get through those five days without sleep and without losing concentration. Since Elias said Joel has less than a week left to live, well, the deadline is ticking and Chise only has one shot. Of course, there is only a fifty percent chance it could work too.

Leannan Sidhe asks Chise why she is doing this. Chise simply wants the people who were kind to her to be happy. While Leannan Sidhe sees this as a selfish desire, Chise continues trying to make the ointment. 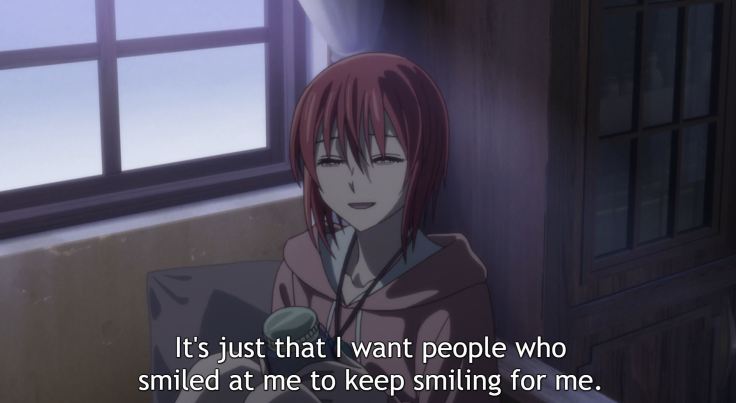 But, she falls asleep. Thankfully, she fell asleep after the ointment was done.  She gives it to Leannan Sidhe, since it is her choice to use it on Joel or not.

Which she does use it on him. The two are able to talk. Joel thanks her for loving him. Thanks to being able to see her that one day he was able to get through the depression of losing his wife. It gave him something to look forward to in hopes to see Leannan Sidhe again someday. Joel offers up his life to her before turning into dust. Leannan Sidhe swears she will wait until the end of time for Joel to return.

When Chise and Elias return home, the Fairy King, Oberon asks for the ointment, since again it is a taboo, and no human should have that. As Chise hands it to him, her ring breaks from using too much magic and she begins coughing blood. Poor girl can never seem to get a break.

Wow, that plot section has a lot more than usual. But, this episode certainly hit hard. It also brings up a lot of things that relate back to Chise in general, and Chise’s relationship with Elias.

Now, the whole Fox scene, to me that felt rushed. That was all in the first five minutes, counting the opening theme. I mean, it is how it happened in the manga, so don’t get me wrong. It just felt like there could have been more to it. Not a whole episode, just more. Elias mentioning again, how cold and lonely it would be without Chise was enough to snap her back, which was nice. Elias may not fully understand emotion, but it is just enough where he knows what he feels without Chise, he may not understand what he feels without her. But without her, he is certainly learning how he does not want to feel that way again.

Now, their relationship can relate to Leannan Sidhe and Joel’s relationship. Elias will live a long time, and current Chise only has three more years to live. Both the fairies have a long-life span, and well, if they were to fall for someone human, that is not always seen as good. Leannan Sidhe will wait forever for Joel to return to her. While, that is sweet, it shows how important their love is and how strong it can be. Never falling for someone else, only focusing on them. Joel mentioned how losing his wife, he may not have loved her since they were forced to marry, but he learned to love her and her loss still took a toll on him. Being able to find love again allowed him to move on. Leannan Sidhe does not get that luxury. The same could be said for Chise, maybe. If Chise dies, that would rip Elias apart. I mean he has thought she died before, and that was not a pretty sight. Now that he is starting to be aware of his emotions, well, more issues will arise.

Love is something that has power in this series. It has a lot of weight to it, where at times we can forget about how much power it can have. This series magnifies that and this episode really brought the attention back to how strong that power can be.

While this episode was emotional, and brought a lot of key points to it. That first half felt a little rushed. But at the same time, if it was longer it would have taken away from the overall message this episode was trying to bring.

Again, there is an impact that comes from the ending of this episode. I will not say more than that. But, as short as this episode may seemed compared to other arcs, this one will have more impact down the road.

One thought on “The Ancient Magus’ Bride Ep 14 Review: Sight Beyond Sight”